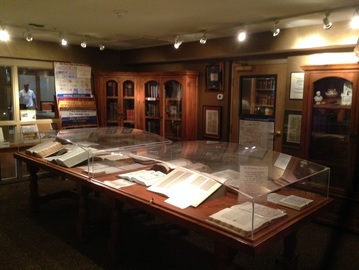 The Bible Museum (Goodyear, AZ):
Founded: 1999
This one room attraction is located on the first floor of a Hampton Inn & Suites on the far western sprawl of Phoenix. The attraction describes itself as "a unique museum where you can actually hold, turn pages and read some of the rarest printed Bibles and rare theological books on the planet."

Woodland Museum of Biblical Archaeology (Woodland, CA):
Created and maintained by a Southern Baptist congregation, this museum seeks to "preserve and display antiquities from the land of the Bible" and "demonstrate the historical and geographic authenticity of the Bible."

Bade Museum of Biblical Archaeology (Berkeley, CA):
Founded: c.1930
Attraction's mission "is to preserve, research, interpret, and present to the public ancient artifacts and texts so as to promote the understanding and teaching of religious history, especially biblical history and the history of the biblical text."

Wycliffe Discovery Center (Orlando, FL):
Founded: 2002
Owned and operated by the Wycliffe Bible Translators, this attraction invites visitors to "use all of your senses as you learn about the art and science of Bible translation through award-winning multimedia and games."

Gustav Jeeninga Museum of Bible and Near Eastern Studies (Anderson, IN):
Founded: 1963
Housed at Anderson University, a Church of God-affiliated college. The collection features "original artifacts from many periods of the Ancient Near East."

Bible Lands Museum (New Orleans, LA):
Curated by the New Orleans Baptist Theological Seminary, this museum combines "authentic" artifacts, "reproductions of well-known artifacts," and a "study/research collection" of "sherds." Exhibits and displays focus on "daily life in biblical times," the "world of Abraham and the Patriarchs," "the world of the Israelite Monarchies," "archaeological method," "archaeology of religion," and "the earliest evidence of writing."

Museum of Archaeological and Biblical History (Albuquerque, NM):
Founded: 2001
Collection features "one of the largest ancient lamp collections in the world if not the largest comprising more than 250 lamps [as well as] weapons, coins, cosmetics, funerary, ostracons, inscriptions, artifacts from ancient kingdoms of the  Persians, Akadians, Ur, Sumerians, Babylonians, Egyptians,  Israelites, Romans, [and] Grecians."

Temple Museum of Religious Art, History, and Culture (Beachwood, OH):
Founded: 1950
"The fourth oldest museum of Judaica in the country. Its collections include antique Torah hangings used in European synagogues that date to the seventeenth century; silver Torah ornaments, antiquities and household pottery from the Holy Land region dating from 2000 B.C.E. to Roman times; fold art objects made and used by Jews in many countries; many historic documents, manuscripts and bibles; and a collection of sculptures, paintings and lithographs by famous Jewish artists." (fr. Ohio Traveler website)

Institute for Biblical and Scientific Studies (Lancaster, PA):
Founded: 1994
Dedicated to "the Bible and science," this attraction features several traveling exhibits of artifacts and replicas, including minerals, fossils, manuscripts, and items named in the New Testament.

Miller Bible Museum (Tigerville, SC):
Founded: 1985
Hosted at North Greenville University, a Southern Baptist college, this collection "spans the history of the Bible from the earliest times to the beginning of the computer age" in over 20 languages and also displays biblical artifacts (e.g., pottery, coins).

Institute of Archaeology Museum (Collegedale, TN):
Founded: 2000
Housed at Southern Adventist University, this collection's "goal is to actively engage visitors of all ages through collection, conservation, education, and exhibition of archaeological artifacts from the biblical world."

Bible Museum on the Square (Collierville, TN):
Founded: 1997
Just east of Memphis, this museum features a permanent exhibit of "ancient Near Eastern and Classical artifacts and artifact replicas as well as maps, images, and interpretive texts," and one temporary exhibit. The museum also hosts lectures, workshops, and archaeological digs for kids.

Treasuring the Word Rare Book and Bible Museum (Sevierville, TN):
A one room attraction, set amid the leisure destinations of Dollywood and Pigeon Forge, TN. The collection showcases "artifacts, rare Bibles, Bible pages, and rare books telling the exciting chronological history of the Bible’s progression into the English language."

Dunham Bible Museum (Houston, TX):
Founded: 1997
Housed at Houston Baptist University, the museum displays "rare Bibles...ancient manuscripts, decoratively illuminated medieval Scriptures, examples of the earliest printed Bibles, the earliest Bibles in English, the earliest Bibles printed in America, [and] Bible translations from across the centuries and around the world."

Liberty Biblical Museum (Lynchburg, VA):
Founded: 2015
The museum is housed at Liberty University's Center for Judaic Studies. The Center's director describes the attraction as "a unique educational collection of authentic, biblical-era artifacts that provide the historical and cultural background of the Jewish people over a 4,000 year period."

Library of Congress Bible Collection (Washington, DC):
Founded: 2008
Attraction uses The Giant Bible of Mainz and The Gutenberg Bible to narrative the transition from "manuscript writing" to "moveable type." The museum collection consists of "1,500 editions of the Bible in more than 150 languages."

Museum of the Bible (Washington, DC):
Founded: 2017
The 430,000 sq. ft. building "will provide guests with an immersive and personalized experience as they explore the history, narrative, and impact of the Bible." The Museum is centered around the ~40,000 piece Green Collection, owned by the founders of Hobby Lobby Stores, Inc.

The Bible Museum (St. Arnaud, Australia):
Founded: 2009
Collection features "more than 1400 Bibles, together with models and artefacts associated with the Bible message." The attraction also has a butterfly and Bible garden with "trees mentioned in or related to the Bible, such as a Cedar of Lebanon, Pomegranates, and a 100+ year old Holm Oak, and Papyrus reeds."

Bible Museum (Barueri, Brazil):
Founded: 2003
West of Sau Paulo, this museum features rare Bible manuscripts and other items, such as a scale model of Noah's ark.

The Metzger Collection at Columbia Bible College (Abbotsford, Canada):
Founded: 2012
A 1200+ piece collection that began in 1967.

Bible Museum (Munster, Germany):
Founded: 1979
The museum is housed at the University of Munster's Institute for New Testament Textual Research. The collection features manuscript items like the Koberger Bible (Nuremberg, 1483).

Bible Museum (Budapest, Hungary):
Founded: c.1990
In existence since the early 1990s, this attraction has been under construction since 2011. The renovated museum will feature two sections: a "traditional" Bible manuscript collection showcasing different translations (with a focus on the Bible in Hungary), and an "interactive Bible experience."

The Bible World (Bangalore, India):
An exhibition of the Bible Society of India, this attraction also includes a Holy Land model.

The Book of Kells (Dublin, Ireland):
A special permanent exhibition at Trinity College Dublin Library, the Book of Kells is a 9th century lavishly illuminated version of the four New Testament Gospels. It is widely regarded as a national treasure of Ireland. The Book is divided into four sets, only two of which are on display at any given time.

Bible Lands Museum (Jerusalem, Israel):
Founded: 1992
This "interactive time capsule" is located in the heart of Jerusalem. Twenty galleries of "ancient artifacts" narrate biblical time from "the sons of Noah" to the early Christian Era. Bible Lands claims to be "the only museum of its kind in the world."

Ernst Gluck Bible Museum (Aluksne, Latvia):
Based around the work of the earliest Latvian Bible translator, the collection features over "220 Bibles, 210 hymnals, 170 editions of the New Testament, 40 Books on Preaching and more than 210 other Christian books, such as the Old Testament, Gospels and textbooks in Latvian and more than 35 other languages."

Bible Museum (Manila, Philippines):
Interactive attraction that includes a replica of the Qumran cave, "life-size" figure of Paul, artifacts and scale models, Bible manuscripts, and "area where guests can dress up like Bible characters."