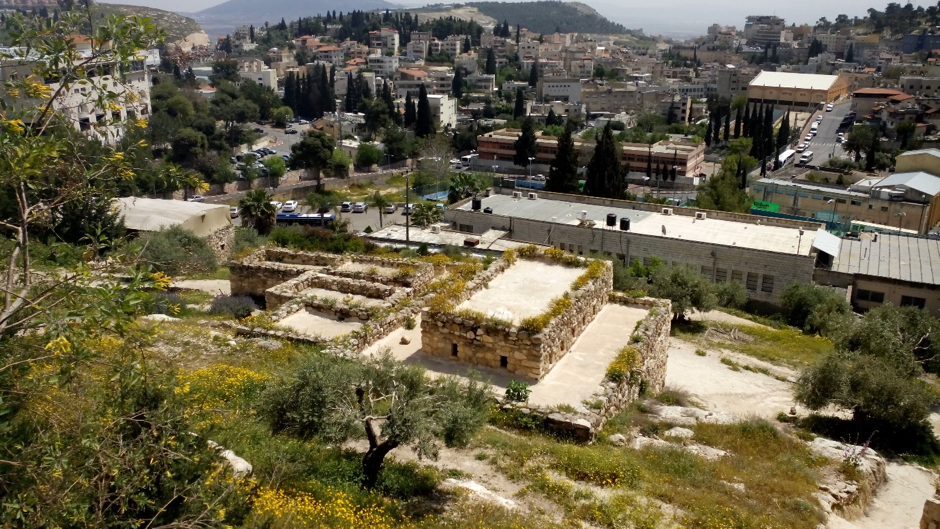 View of Nazareth Village and surrounding city from above.
Nazareth Village (NV) is a living history museum that promises to make a biblical first century come alive for visitors. It is located about 500 meters from the Old City of Nazareth - the Arab Israeli/Palestinian city in northern Israel where Jesus spent his childhood (e.g., Matthew 2:23; 21:11; Mark 1:9, Luke 1:26; 2:39, 4:16, John 1:46; 19:19). 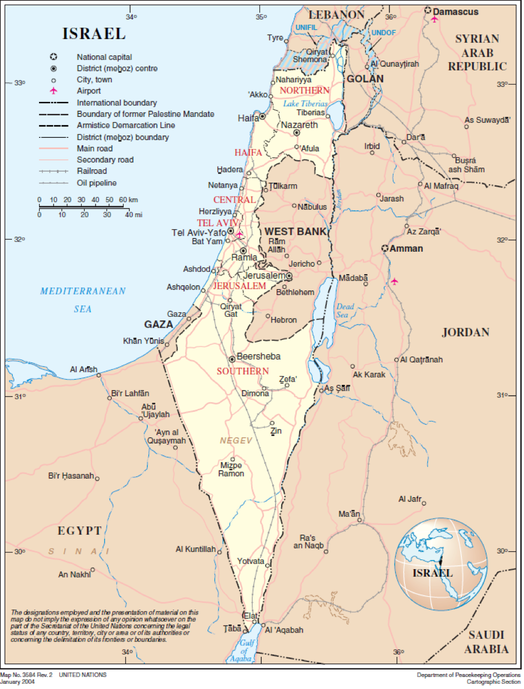 NV was founded by Dr. Nakhle Bishara, a Christian medical director with Nazareth Hospital. He wanted to create an ‘authentic’ Holy Land experience for disenchanted evangelical pilgrims who struggle to connect with the sites of traditional denominations throughout Israel-Palestine on their quest to “walk where Jesus walked.” Developed with the help of U.S. donors and archaeologists, the main agenda is to enable visitors to immerse themselves into what everyday life at Jesus’ time might have looked like. 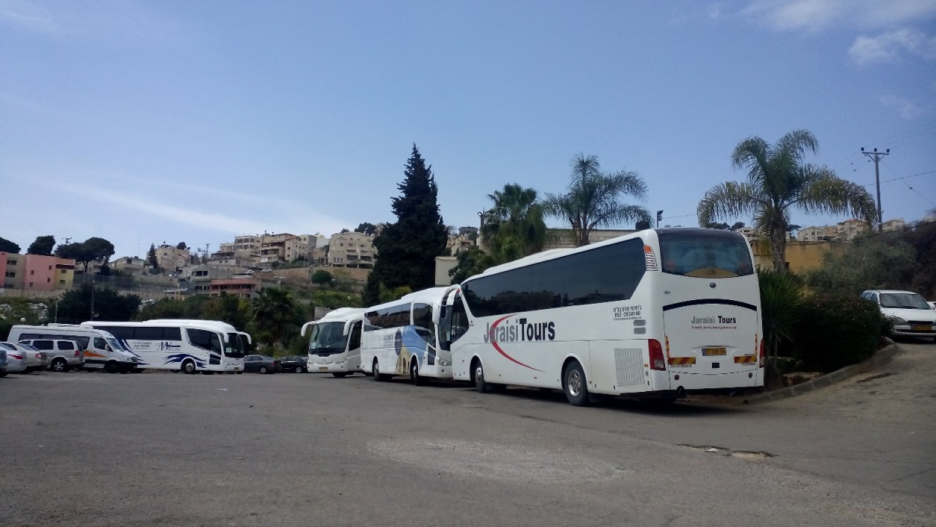 ​From the spacious car park, visitors are led first through a dimly-lit museum, which provides some background to the history of Nazareth. 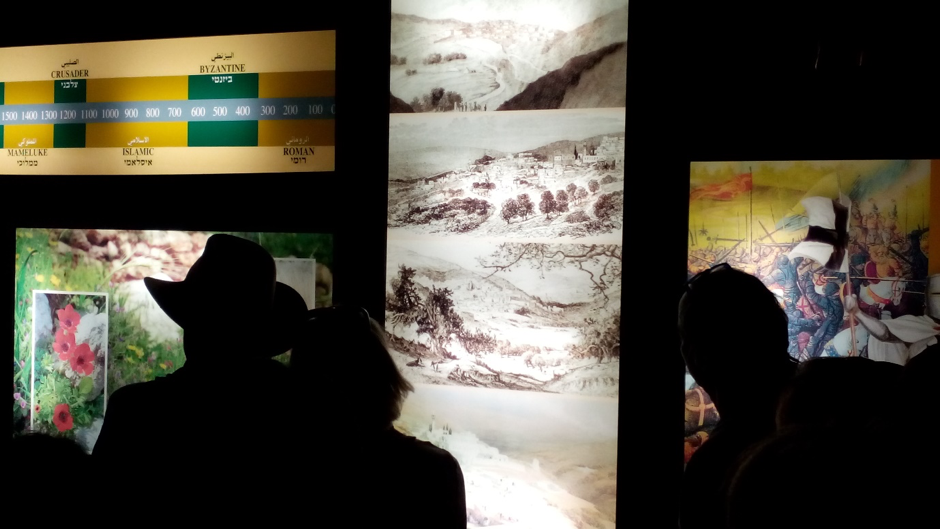 ​From here, visitors exit onto the outside property: a slight upward slope flanked by fragrant rosemary bushes. In spring, visitors are engulfed in an abundantly blooming wildflower meadow, and a flowering avenue of white-petalled almond trees. Donkeys and chickens roam about the grounds. 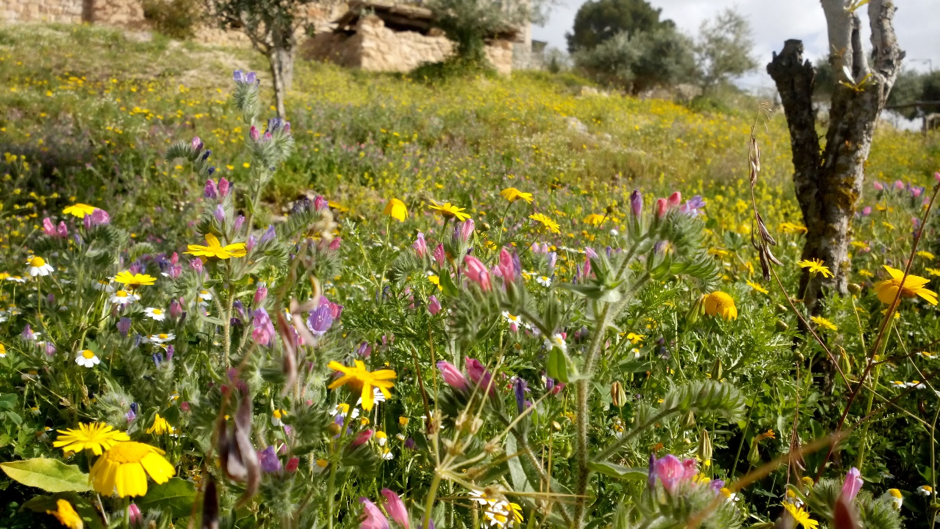 NV is only accessible through a guided tour called a ‘parable walk,’ led by a local Palestinian Christian or messianic Jewish guide. The tour is organized by nine ‘stations,’ each linked to a story Jesus used in his teachings according to the Bible. While no explicit link is made to a ‘Stations of the Cross’ experience (which many visitors seek out on Jerusalem’s Via Dolorosa, and which has been adapted as a reflective journey all over the world), the way in which each group moves from one stop of their tour to the next, each reflecting on an aspect of Jesus’ teaching, bears striking similarities. Station One is an olive tree, where the Hebrew word for ‘shoot’, necer, is linked to the word ‘Nazarene.’ This little language study is used to explain the prophecy in which Jesus, a Nazarene, is described as ‘shoot of Jesse’ (Isaiah 11:1). 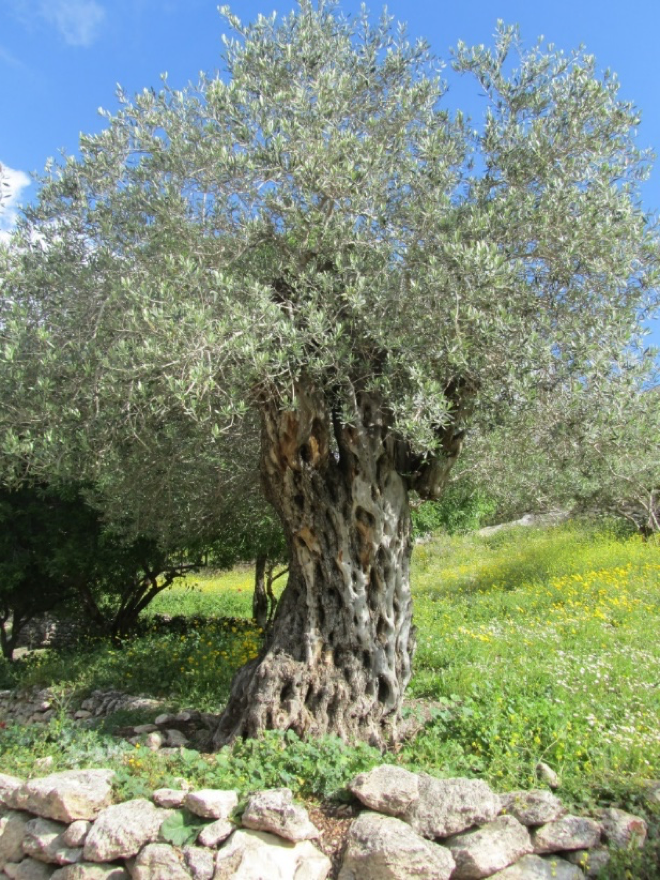 ​Station Two features a replicated threshing floor, which displays the difference between wheat and chaff (Matthew 3:12).
​The next stop is the sheep pen, where the guide repeats Jesus’ story of the good shepherd (John 10). In spring, visitors can admire new-born lambs. Moreover, it is here that visitors meet the first costumed staff, and are encouraged to take pictures of, and with, them. 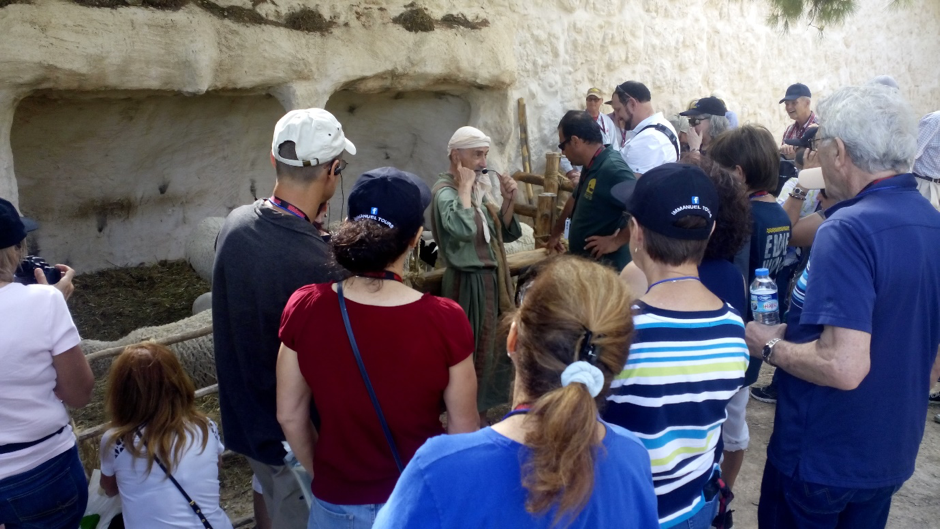 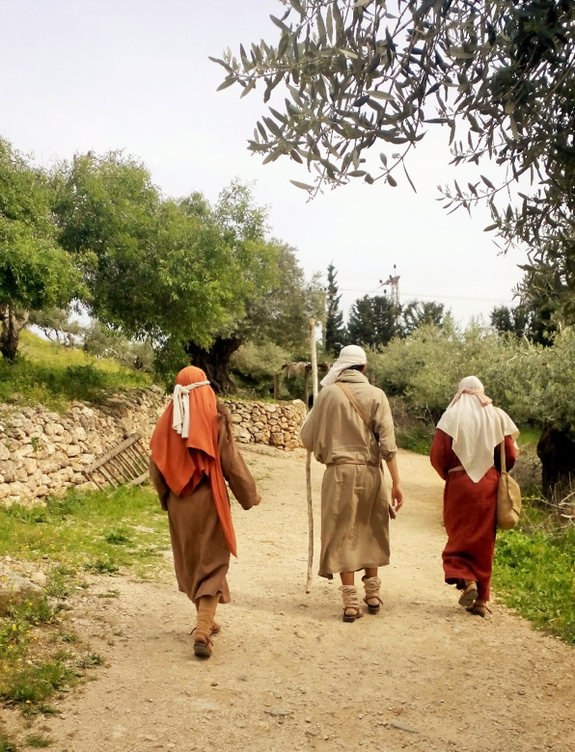 First century characters are a key strategy for bringing NV “to life,” and for increasing the authenticity of the experience for visitors. Many take pictures of the characters, notably for use as illustration in Sunday School classes they teach at home. Often, visitors pose next to the them, or join in the first century activity being showcased, which deepens their immersive experience and captures it as photographic memory. The staff is mostly Palestinian/Arab Israeli Christians, a small number of messianic Jews, and international volunteers: the latter  are arranged through NV’s umbrella organization, Nazareth Trust.
Other stops along the ‘parable walk’ include a reconstructed first century tomb (similar to the evangelical-run Garden Tomb Complex in Jerusalem), a watch tower, an olive press, a carpenter shop and a weaver’s room with live demonstrations.
Two stations are based around archaeological excavations onsite – an original wine press and agricultural terraces – which mobilize the authority of modern science to bolster the desired authenticity. 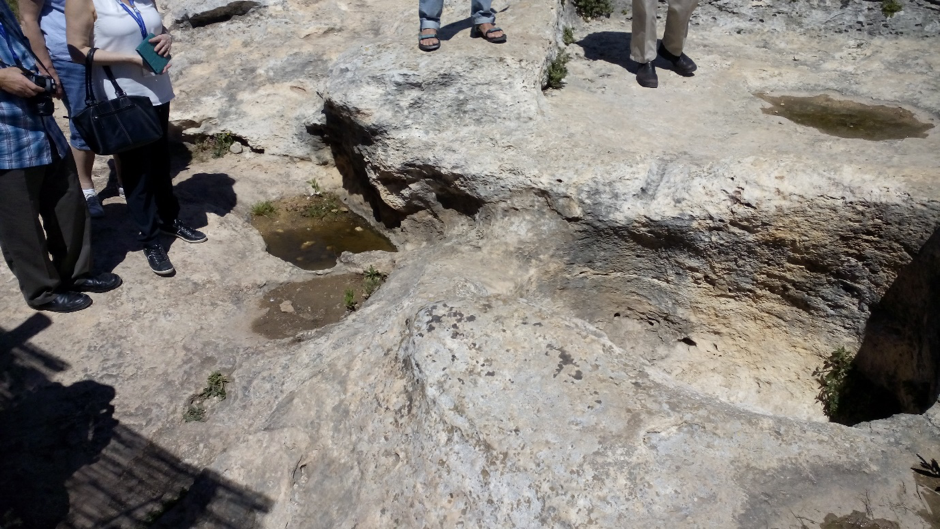 Excavation site of original wine press.
​The parable walk ends in a reconstructed first century synagogue (the only such life-sized replica in Israel), where Jesus’ calling according to Luke 4 is re-enacted by the guide, who reads out from a reconstructed scroll the words which Jesus read to his fellow villagers from Isaiah 61: “The Spirit of the Lord is upon me…” 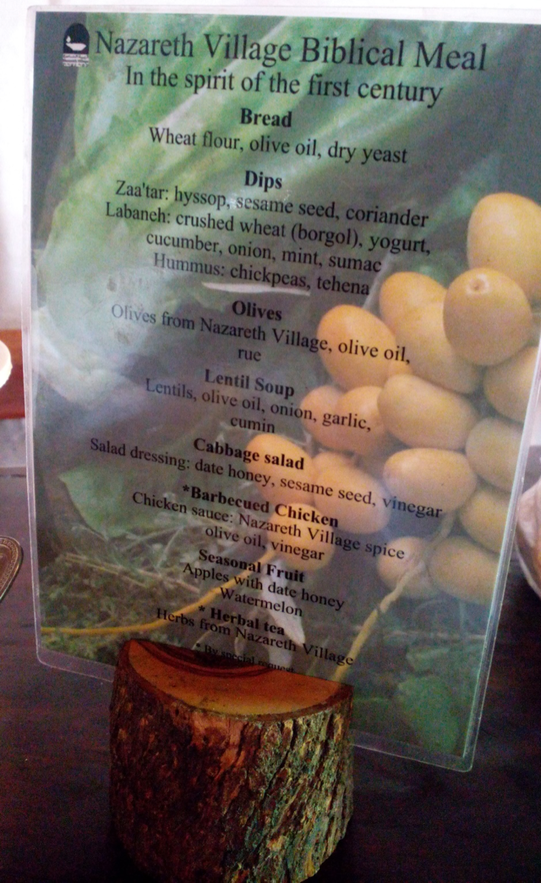 ​After the tour, visitors experience a first century meal (consisting of bread baked over an open fire, different dips, chicken, and salad) served by more costumed staff, while seated on rustic wooden benches with a backdrop soundtrack of harp and lyre music. ​
Visitors exit through an air-conditioned gift shop, which sells English-language books and DVDs, crafts, and NV paraphernalia, such as first century costumes, olive oil, herb mixes, and postcards. Some of the items that sell best are hand-made rag dolls by ‘Hanna’, the weaver of NV, as well as olive wood carvings (crosses, mangers, etc.) and ceramic crockery painted with biblical motifs or stylized cityscapes of Nazareth or Jerusalem. While the dolls are unique to NV, the other items are similar to those sold by countless souvenir shops throughout Israel-Palestine. Many visitors prefer to support explicitly Christian vendors such as at NV in a more shop-like atmosphere (with fixed prices) rather than haggle with merchants at other locations. 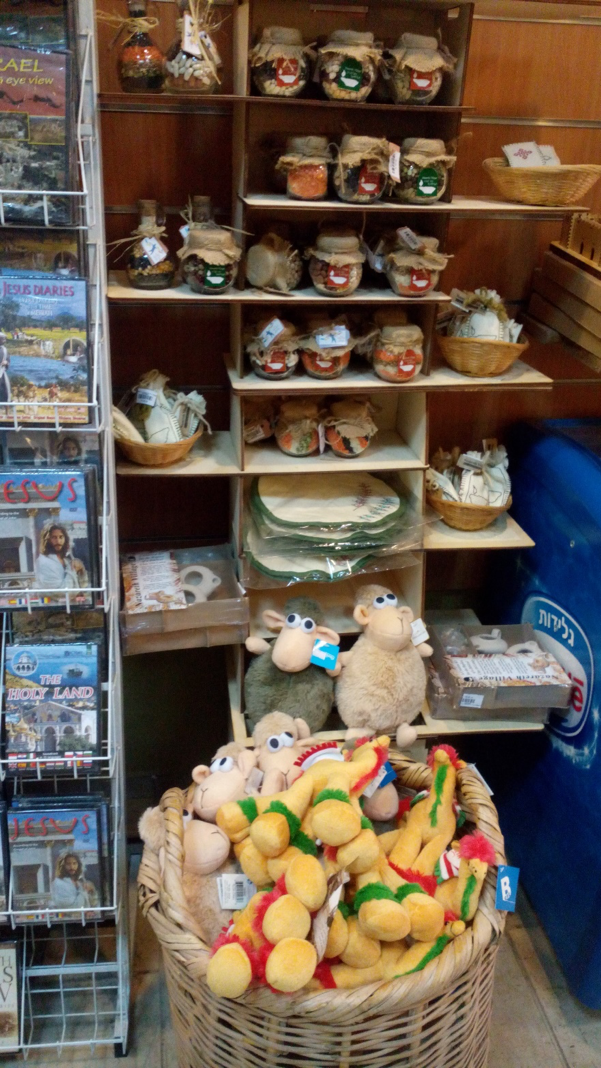 In addition to its function as a tourist-pilgrim site, NV has served as a filmic stage. For example, it was the set for the 2008 television series, “The Nazareth Jesus Knew” hosted by evangelical celebrities Pat Boone and Gary Bayer. Similar re-enactments in film-format are used as publicity, for example in this Christmas Greetings message shared through NV’s website and social media.
Nazareth Village provides an immersive experience focused on illustrating examples Jesus used in his teaching and the materiality of Jesus’ time. Despite many of its staff being local Palestinian Christians, contemporary Christianity in Nazareth (30% of Nazareth’s population is Christian) and the ongoing Israel-Palestine conflict are both absent from the tours. Instead, Palestinian Christians slip into the role of first century Jews in this representation of Jesus’ time.

​For Holy Land travelers who struggle to meaningfully connect with the sites and shrines of traditional denominations, NV helps to create a sense of “walking where Jesus walked.” A 2016 TripAdvisor review testifies to the site’s efficacy and its function in relation to other stops on the tourist-pilgrim trail.

Rose, Lena. 2020. Nazareth Village and the Creation of the Holy Land in Israel-Palestine: The Question of Evangelical Orthodoxy. Current Anthropology (Online first, May).