​Palestine Gardens is a replica, non-scale model of the Holy Land during the 1st century CE, the time of Jesus. While the distances between sites are largely accurate, the size of sites themselves are not to scale, sacrificing accuracy for evocativeness. Visitors to the site have the opportunity to take a loop around the gardens with the site’s caretaker, Don Bradley, who relates each location to biblical verses and stories. 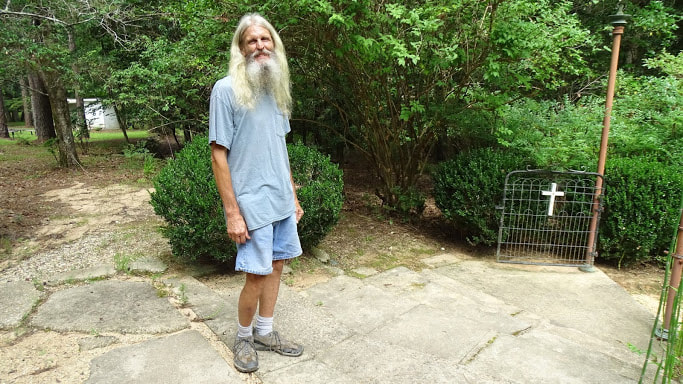 Palestine Gardens caretaker, Don Bradley.
​The gardens were founded in 1960 by a Presbyterian Minister named Harvell Jackson. In the 1930s Jackson taught at a local seminary and became generally frustrated with how inaccessible visits to the Holy Land were even to those training for the ministry. Jackson created the model as a substitute for an actual visit to the Holy Land. He felt that understanding the Bible’s geography was an essential part of a believer’s ability to internalize and understand the Bible’s history and by extension, its theological truth. In the early 1990s, Harvell passed management of the Garden to Don Bradley, the garden’s current caretaker. Bradley had visited the site as a child in the 1960s. It was not until his 30s, however, when Bradley became a born again Christian and became involved. During my visit, Bradley told me that shortly after he became religious, he was visited in a dream by God who told him that part of his purpose was to help maintain the garden, sharing the Holy Land’s geography and the Gospels with visitors.
​Palestine Gardens is located at the end of a long, poorly paved road surrounded by forest brush and the occasional trailer home. Before entering the site, visitors encounter a small stone arch built on columns. Though not corresponding to the exact composition of an ancient Roman arched doorway, the structure still evokes the time period and serves as an initial mechanism for transporting visitors into the mindset that they are about to enter the ancient past. Upon arrival, visitors are greeted by Don Bradley who gives a short introduction to the history of the garden before inviting you to join him on a quarter-mile loop around the model. 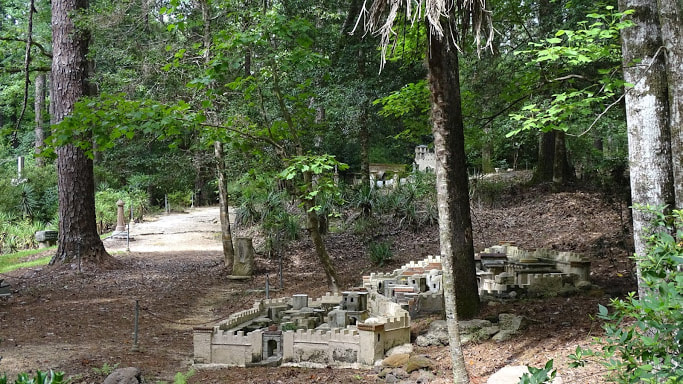 ​The tour begins on the east bank of the Jordan river across from Jericho. Imitating the Israelites in the book of Joshua, visitors are invited to walk across the Jordan river as a dramatic and altogether biblical way of entering the Holy Land. 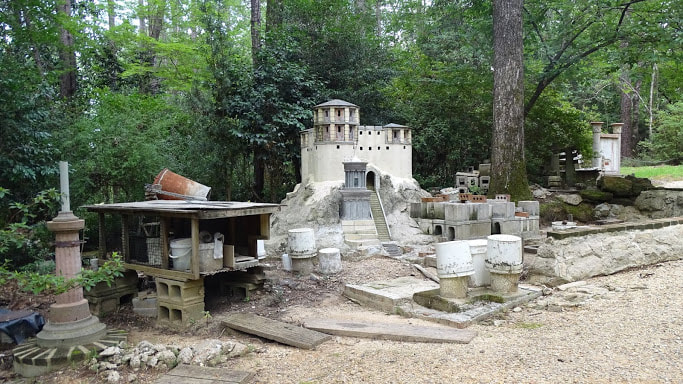 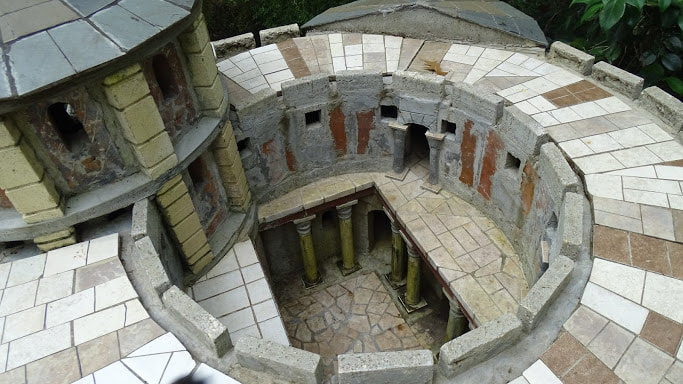 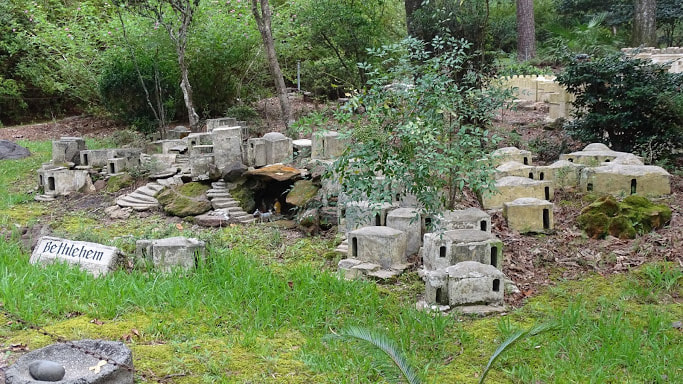 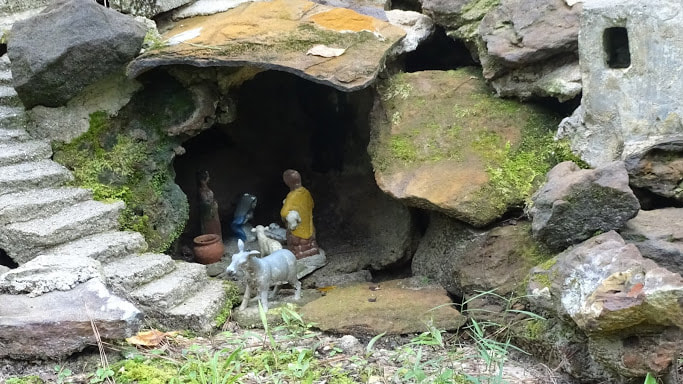 ​Once inside the land, visitors are taken past Jericho, past Herodium, onto Bethlehem and then to Jerusalem. At each site, Bradley stops the tour, taking time to discuss verses of the Bible that refer to those locations and also covering the aspects of Jesus’ life, as depicted in the gospels, that occurred in those places. The walk past Bethlehem is spent telling the story of Jesus’ birth while the model’s centerpiece, Jerusalem, is used to tell a fleshed out version of Christ’s passion. 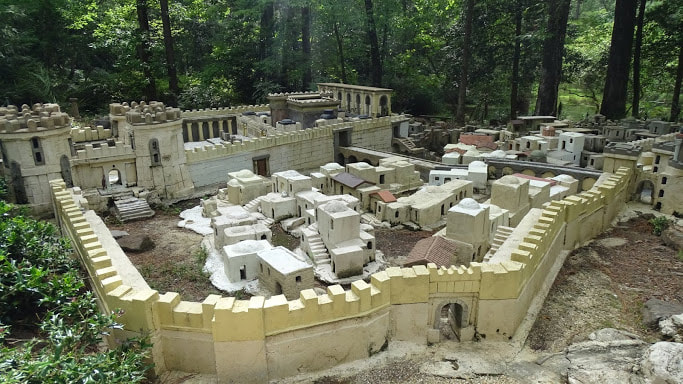 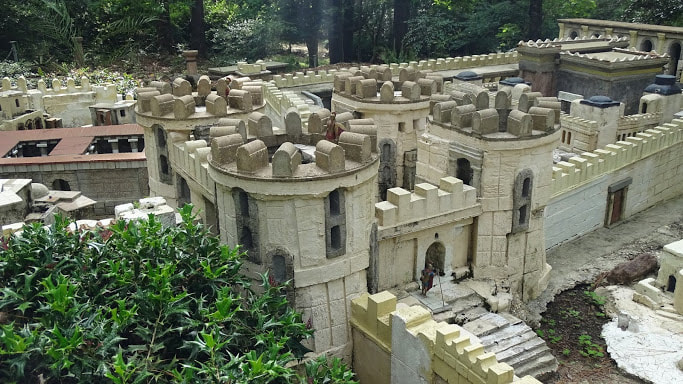 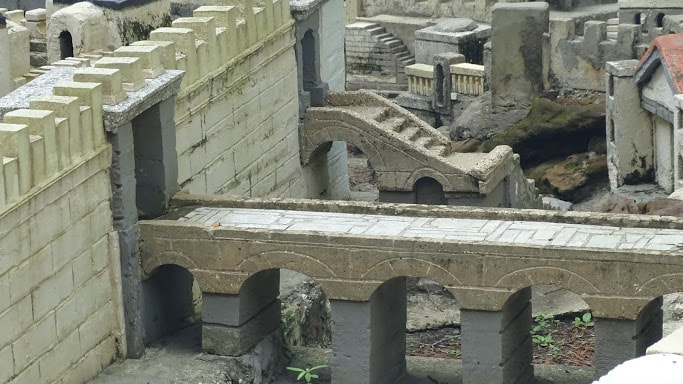 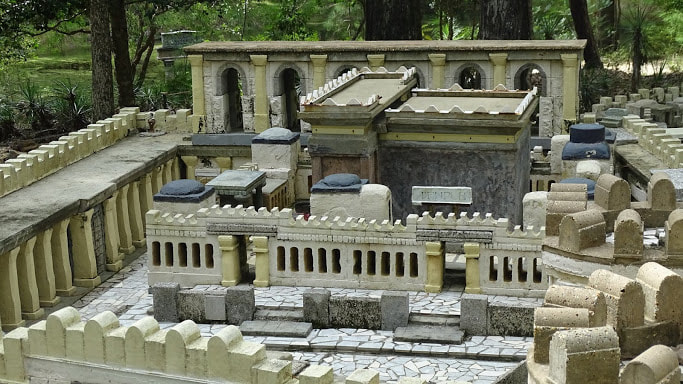 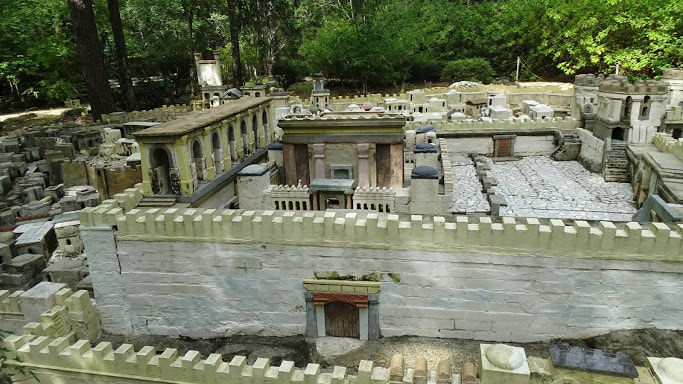 ​As the story progresses, Bradley leads you around the model taking visitors from the temple, to gethsemane, through each station of the cross, and finally calvary. By incorporating locations and movement into the telling of the story, the model serves to vivify the biblical text for visitors. The tour itself is a mix between educational, evangelical, and autobiographical. At each site, visitors are not only told about the location and recited well-known Bible verses and stories, but also hear Bradley’s personal interpretations of the meaning of those stories, his views on the wondrousness of Jesus’ miracles, and how important Jesus and the Bible have been in his own life. I found Bradley to be charming, interesting, and engaging, engrossing visitors in the model, and in the power of his own faith. Though some of the structures go back to the garden’s original opening, Bradley spends much of his time working to add sites to the model and to maintain older structures. Though these are often impressionistic, in certain cases, like the recent addition of the Herodion, Bradley endeavors to follow archaeological reconstructions available in popular venues such as National Geographic. 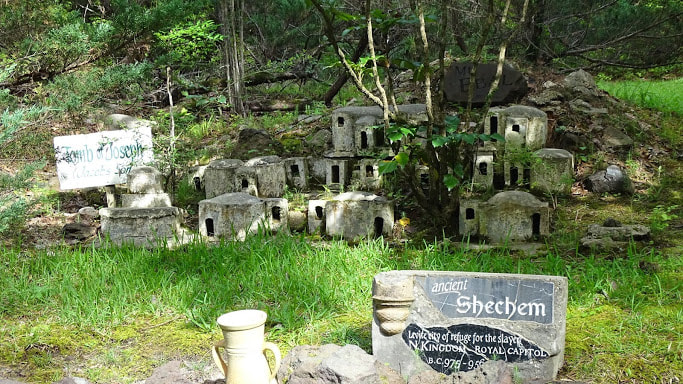 ​After visiting Jerusalem, visitors are led northwards through Samaria, passing by sites such as Mount Ebal, Neopolis/Shechem, and Jezreel. As the model is primarily oriented towards the New Testament, several locations to the south of Jerusalem, which are prominent in the Hebrew Bible are absent. For example, the model does not include Be’er Sheva or Hebron. It does however contain a small square monument representing Egypt used by Bradley to refer to the episode in the gospel of Matthew where Jesus’ family flees to Egypt to escape Herod. 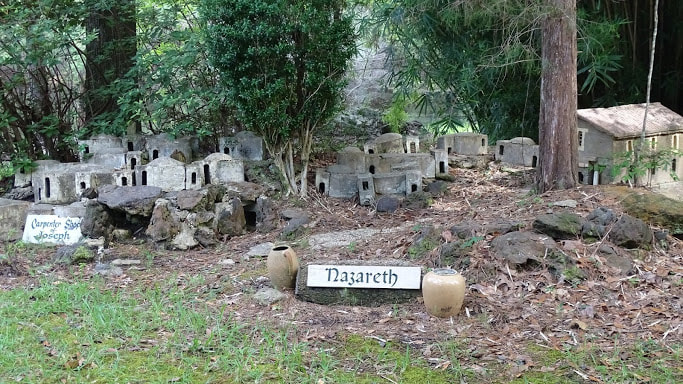 ​The tour then continues into Nazareth and the Galilee where its focus turns towards Jesus’ upbringing and early ministry in the region. During my tour, we discussed the episode of the gospel of Luke where Jesus preached in a synagogue and also the types of fishing boats used on the Sea of Galilee in the 1st Century CE. As was visible in the case of Tiberius, the model attempts to place its locations around where the various sites were located in the 1st Century, rather than the city's modern location.
​The tour concludes with a final journey northwards where visitors swing past Banias, mount Hermon, and Dan, the traditional northern boundary of ancient Israel.

The model fulfills this function both for locals, for whom it is the host location for several Sunday schools, but also for people from all across the United States and all over the world. Palestine Gardens can be found as an attraction on numerous websites detailing fascinating locations for road trip stops. Despite this, I got the sense that the model does not get that many visitors. In some ways however, this ensures that each visitor receives a more engrossing experience, having unfettered access to the model and the ability to freely converse with Bradley.

In certain aspects, the bird’s eye view of the model might even surpass an actual visit for its educational qualities. Whereas Christian believers visiting the Holy Land might be whisked to and from religious sites on a tour bus without a great deal of awareness regarding the distances involved between sites or how each place relates to one another geographically, when visiting the model, one is asked to consider the land’s geography and the distances between locations. This can even add temporal depth to the Bible’s stories as visitors are asked to consider the time between events as characters moved between cities or regions of the Holy Land.

Nonetheless, a model is not without its downsides. The constructed narrative of Palestine Gardens relates only to the New Testament. Whereas part of the attraction of visiting the actual Holy Land is witnessing its palimpsest of history and the diverse groups who value the land for numerous unique reasons, such features are absent within the constraints of the model. These constraints are both built, as certain locations are absent from the model, and related to the tour as performed by Bradley, which uses the model to flesh out New Testament verses. In terms of the model’s purpose to immerse believing visitors in the geographic world of 1st Century Judea, the world of Jesus of Nazareth, however the model is no doubt successful.