On a small hill near beautiful Lake Burley Griffin, a giant Cross attracts the attention of near and distant passersby. The adjacent city area is a popular tourist zone. Along with Parliamentary Triangle, where the Australian Parliament House is located, there are numerous national institutions, including a museum, library and gallery. “The Great Cross” is a landmark of the ecumenical Australian Centre for Christianity and Culture (ACC&C) established in 1993, affiliated with the public Charles Sturt University and the Anglican St. Mark's National Theological Centre. 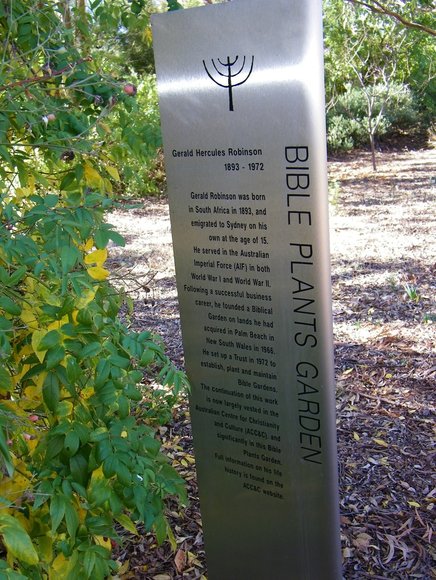 A brief story of the garden is presented near the entrance surrounded by rose bushes.
Tucked away in a corner of a hill on the ACC&C grounds is a Bible garden. Founded in 2007, the garden was established in remembrance of a businessman, Mr. Gerald Hercules Robinson (1893-1972), who devoted himself to creating Bible gardens after a 1962 visit to the newly built Bangor Cathedral garden in Wales. Dr. Tatham Whitehead, a Welsh botany professor, developed a list of 148 individual plants named in scripture, and the Canberra garden cultivates 68 of these. For his first garden in Sydney, Gerald Robinson made several trips to Israel and Palestine to collect native seeds.
Throughout the garden informational signs present the botanical name, the scriptural significance, and a biblical citation for each plant. One can also pick up this free brochure or purchase a small booklet, which acts as a more detailed pedagogical device. With benches for sitting placed conveniently around the garden, visitors are encouraged to sit, rest, and contemplate the garden experience.
The garden’s design is distinct compared with gardens globally. While many opt for the monastic-inspired cross shape, the ACC&C enacts their ecumenical identity by using the form of a Jewish menorah. 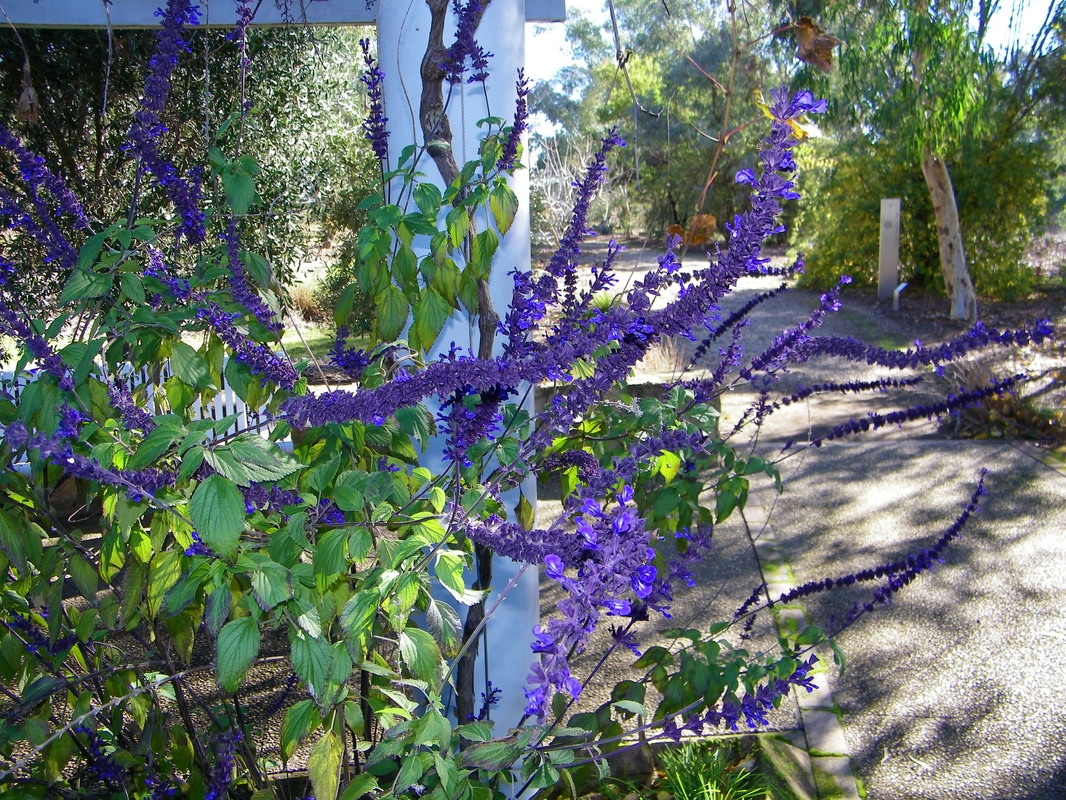 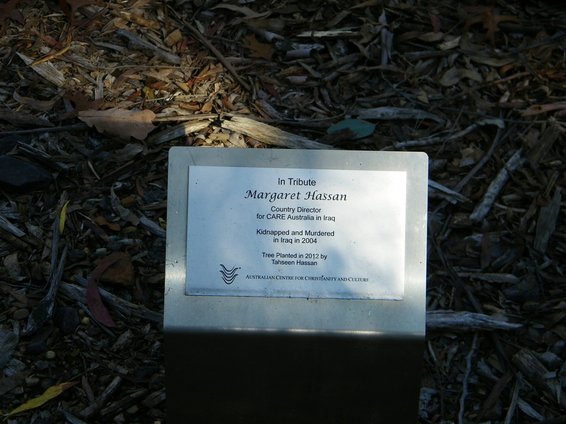 ​The garden integrates several other features in addition to scriptural flora. Here, a commemorative plaque next to a tree pays tribute to an Australian Christian who lost her life doing humanitarian service in Iraq. 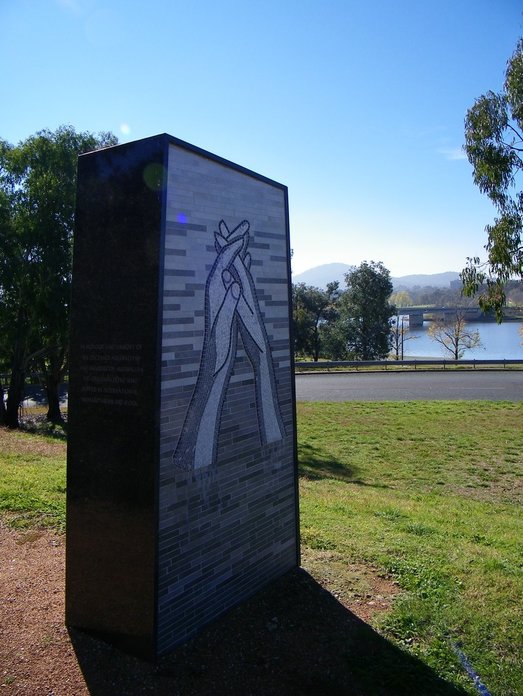 ​With lake and mountains in the background, a large stone monument bears a carved depiction of hands joined in prayer. The other side of the monument bears the inscription: "In honor and memory of all deceased Australians and members of Australian Aid Organization who served in international humanitarian aid work." 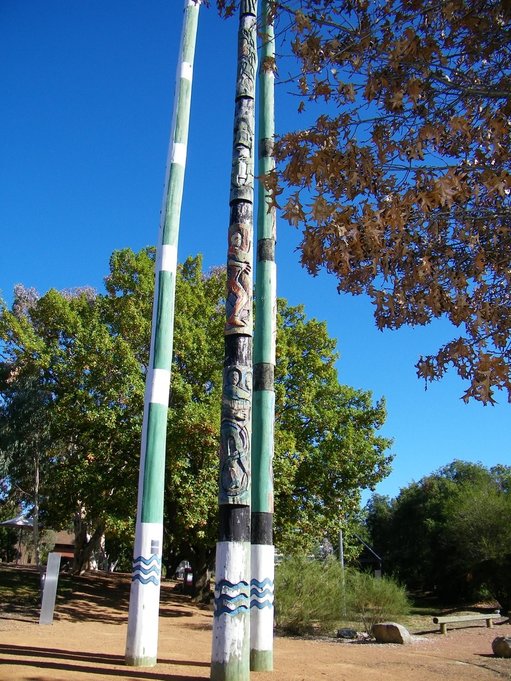 ​Three "Pilgrim Poles” stand nearby, which are said to represent Australia’s three most significant bodies – Christianity, the state and indigenous Aboriginal culture. A sign explains that, "The pilgrim poles show symbols drawn from Aboriginal and Christian spirituality. They portray life as a journey fuelled by faith, hope and love.” 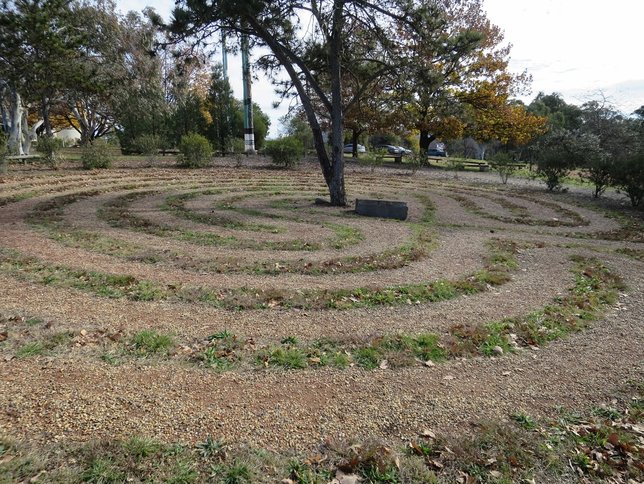 With the Pilgrim Poles in the background, a walking labyrinth concludes the garden experience. An entry sign presents it as “a gift of The Pilgrimage Project, which linked Chernobyl survivors with uranium miners and aboriginal traditional owners.”
The ACC&C garden reproduces many features typical of biblical gardens worldwide. However, it powerfully illustrates how gardens work as expressive culture. This raises a key question for the comparative study of materializing the Bible attractions: how is the idea of “Christianity” performed through the garden’s spatial and material choreography? Here, “Christianity” is merged with other social and political affairs resonant for the Australian public, including the livelihood of Aboriginal people, the Muslim population and international/political engagements involving Australian Christians. In turn, the garden situates “Christianity” within a broader storyline that is highly engaged with local, national, and global humanitarian concerns. The garden's embodied conception of Christianity is described in detail in this 2013 radio interview with the ACC&C director. 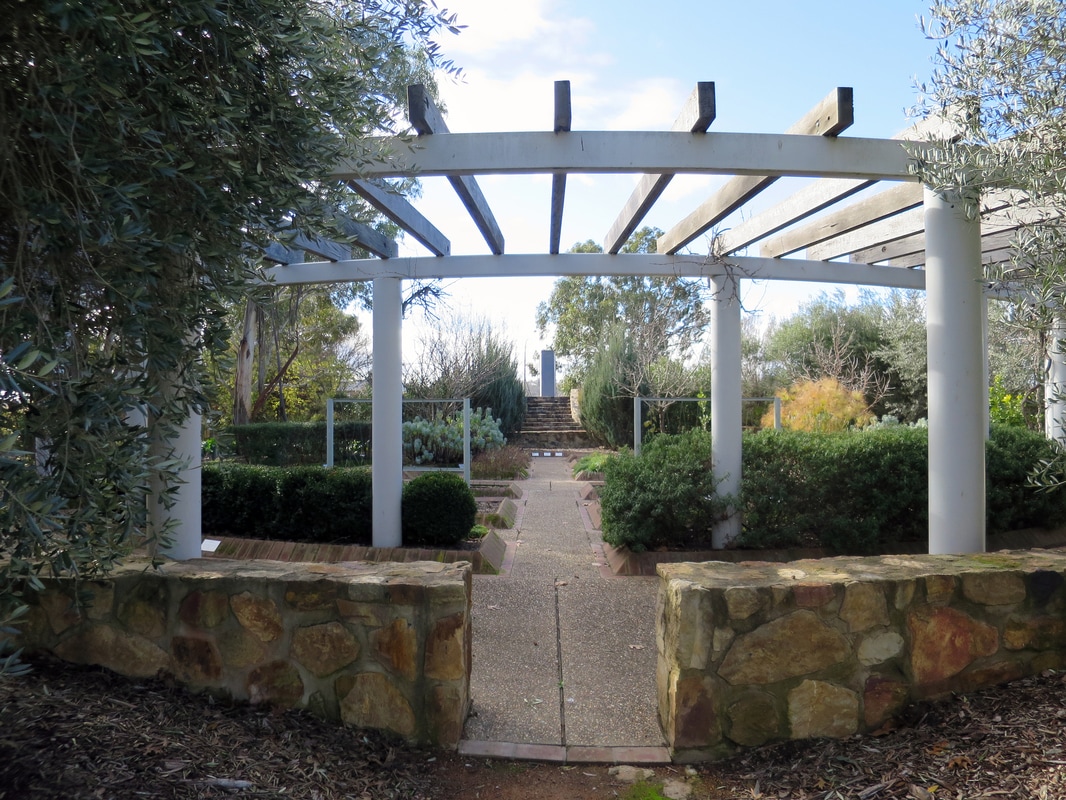