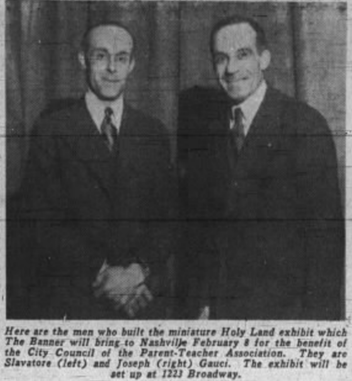 Salvatore (left) and Joseph Gauci (right). Image via the Nashville Banner, February 1938.
This Holy Land miniature was built by Maltese brothers Joseph and Salvatore Gauci.  The story of the model begins in Malta, where the brothers were raised.  During their childhood in Malta, a deeply Catholic country, the boys’ mother would tell them Biblical stories as children to teach and soothe them.  Later in their youth, their mother became ill.  Thinking back upon the stories that made them happy as children, Joseph promised to take his dying mother to see the Holy Land.  However, her health worsened and she could no longer travel, so Joseph and Salvatore began to make miniature versions of the Holy Land for their mother to see instead.  It is not believed that any of the figurines that were made in Malta became a part of their North American model, as they stated in journal articles that construction began on their touring model in 1914.
Before they emigrated to Canada, however, Joseph served in the British Navy at age 18 and worked with an archaeologist (whose name is not reported) during his furloughs, where he was able to spend five years total in Palestine.  These five years gave Joseph a clear sense for how he wanted to depict the Holy Land.  Back in Malta, Salvatore worked in the dockyards as an electrician and submarine repairman; he would later go on to engineer all the electrical features of the model.
Once the brothers moved, they ended up in Edmonton, Canada, in the province of British Columbia.  It is not known when exactly they arrived in Canada, but it is known that they began work on the model in 1914, which continued for 10-11 years while Joseph worked as a sign painter, and Salvatore as an electrician.  The model began touring in 1924, and made its way across Canada and the United States.  It traveled for about 38 years between 1924 and 1962; in the map below, you can follow their journey. 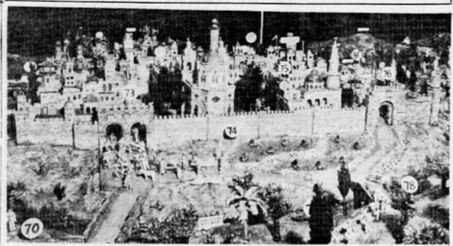 A close-up image of a section of the model. Image via The Fort Worth Star-Telegram, November 1937.
​     It was reported in 1937 that they had made $150,000 in just two years of displaying the model. Often, the model would be sponsored by regional newspapers for the benefit of local charities, and admission stayed pretty steady at 25 cents for adults and 15 cents for children under 12, until the 1950s and the 1960s, when admission went up for adults to 50 cents and $1, respectively, and 25 cents for children.  Most often, it was displayed not in churches or religious spaces, but in auditoriums and warehouses.  Thomas Edison, Eleanor Roosevelt, and Shirley Temple were among the model’s more notable visitors.  The brothers dedicated 47 years of their lives to this model, 37 of which were spent traveling.  Later reports stated that the brothers never settled down to have families, at least while they owned the model, and instead called home “wherever the model is.”
In 1961, retired veterinarian and Atlanta resident Dr. Paul Wallace purchased the model from the Gauci brothers reportedly for $18,000.  In some reports, it lists Wallace’s brother (unnamed) as a co-owner, and in others, it lists a Reverend Harold Bramblett as a co-owner along with Wallace.  Coincidentally, Bramblett used to work as a sign painter, just as Joseph Gauci did.  After Wallace purchased the model, it made a few tour stops before Wallace declared he wanted it to have a permanent home in Santa Claus, Indiana.  However, before this could happen, the model was destroyed by a fire in May of 1962.  Wallace had owned the miniature for less than a year when this happened.  The model, valued at over $1,000,000 at that point, was reportedly insured for $100,000, while a later report states that it was insured for $125,000.  As he testified for his insurance claim, a headline from the Indiana Herald reads that he wept on the witness stand as he spoke.  Many reports say that Wallace loved the model and marveled at the craftsmanship, and his weeping seems to be a testament to this, but his true feelings about the model and how much he valued it will never be known.  After the model was sold to Wallace, there are no more records that can be found about the Gauci brothers, whether or not they started families, or whether they knew what happened to their lives’ work.

Features of the model: