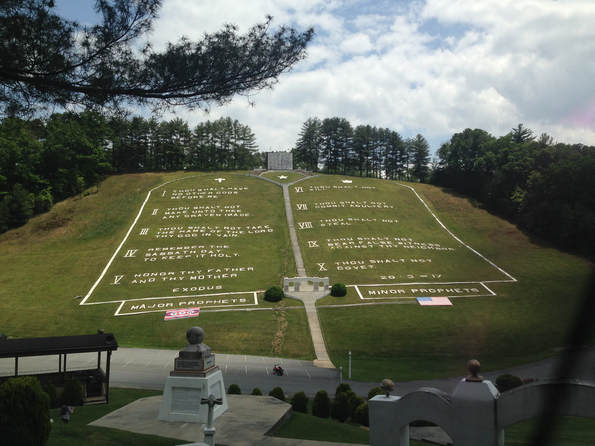 The Great Passion Play (Eureka Springs, Arkansas):
Founded: 1968
The attraction's largest feature is the Holy Land tour: a "3-hour interactive Biblical teaching tour, [where] you will explore the ancient Middle-Eastern culture in which Jesus was raised and will meet characters from the time of Moses to the time of Christ." Also, there is an outdoor theatre that stages a daily Passion Play, a Tabernacle replica, and a Bible Museum.

The Walk at Shields (Indio, California):
23 statues depicting 14 scenes from the life of Jesus are spread throughout this date farm. Listen to audio narration for each scene on the website.
Founded: 1924

Biblical History Center (La Grange, Georgia):
Founded: 2006
A one hour drive southwest of Atlanta, the Center (formerly Explorations in Antiquities Center) gathers various Holy Land sites and scenes. A large focus is on elements of everyday life, including a goat hair tent, olive press, tombs, and vineyards. A gallery showcases over 200 "ancient artifacts," and visitors can schedule a "biblical meal" in rooms modeled after "ancient cities" from the first century.

The Effingham Cross (Effingham, Illinois):
​Founded: 2001
198-foot cross at junction of I-70/I-57, surrounded at base by interactive 10 Commandment display.

S.P. Dinsmoor's Garden of Eden (Lucas, Kansas):
An outsider art installation that features numerous sculptures, many of which are interpretations of the Genesis garden. ​
Founded: 1907

Garden of Hope (Covington, Kentucky):
Founded: 1958
2.5 acre attraction tucked away on the backside of a working class residential neighborhood. The main feature, a Garden Tomb replica, is complemented by a Sermon on the Mount statue and landscape materials from Israel-Palestine (e.g., stone from the Jordan River). The attraction affords a tremendous view of the Cincinnati skyline and is usually washed by the sound of I-75 passing traffic, which flows directly below the hilltop location.

Palestine Gardens (Lucedale, Mississippi):
"A life long project to tell others about Jesus." The scale model includes The Jordan River, ruins of Jericho, a palace of Herod, and New Testament villages like Samaria and Galilee.
Founded: 1960

Pathway Through the Bible (Joliet, Montana):
Grotto-style art environment with depictions of Solomon's Porch, Adam and Eve, Daniel in the Lion's Den, Lazarus, and others.
Founded: 1957

Fields of the Wood Bible Park (Murphy, North Carolina):
Founded: 1944
Replicas of Golgotha and the Garden Tomb and "the world's largest 10 Commandments."

Zoar Village Revelation Garden (Zoar, Ohio):
Founded: 1820
Created by the Society of the Separatists of Zoar, a German communitarian group. The village garden is inspired by Revelation 21 and represents the theological lesson of "many paths to Christ." A tall spruce tree in the center represents Jesus, while 12 surrounding trees represent the disciples. Today's garden reflects a restoration effort that began in 1960, after the original garden was dismantled in the 1920s to build tennis courts.

Christ in the Smokies Museum and Gardens (Gatlinburg, Tennessee):
Set in the Smoky Mountains, this attraction features "incredibly lifelike scenes telling the Story of Christ."
Founded: 2009

Crystal Shrine Grotto (Memphis, Tennessee):
Founded: 1943
Free to the public and located inside an urban cemetery, the site features replications of biblical scenes.

Museum of Biblical Arts (Dallas, Texas):
Museum exhibits "historical and contemporary works of art and interest that encourage study, appreciation, and discourse in regards to the evident role of Biblical themes in art history, the humanities, and world culture." In May 2015, the museum added a Stations of the Cross "sculpture garden."
Founded: 1967

The Cross Ministries (Groom, Texas):
Multiple sculptures on site, including: Last Supper, Stations of the Cross, and others.
Founded: 1995

Congregation B'Nai Zion (El Paso, Texas):
"A living map of the State of Israel," built in 1999, featuring replicas of the Western Wall and Masada.
Founded: 1999

​Bibel Welt (Salzburg, Austria):
Founded: 2009
"More of an adventure playground than a typical museum," experience a market and map of Paul's journey. Enter through "a gigantic ear"!

City of Refuge (South Andros, Bahamas):
Founded: 2016
20 acre attraction is sponsored by "Bahamas Global Impact, Prayer and Fasting Network." A video documentary of the park's making by the founders explains: "It's biblical, it's ecological, it's geological!" City of Refuge will feature 49 Holy Land sites, including the Upper Room, Mt. of Olives, Garden of Gethsemane, and Jericho Road.

Temple of Solomon (Sau Paulo, Brazil):
Founded: 2014
This "exact replica" of Solomon's Temple was created by the neo-Pentecostal Universal Church of the Kingdom of God. Portions of the attraction were built using stones flown in from Israel and inside is a replica of the Ark of the Covenant.

Noah's Ark (Hong Kong, China):
Founded: 2009
"Full-scale" replica of the ark on Ma Wan Island. The replica is part of a larger park with other attractions, and the ark's interior serves as a hotel and conference venue. The park "aims to foster family values and teach love, social harmony and care for the environment."

Panorama of the Crucifixion of Christ (Altotting, Germany):
Founded: 1903
Explore the sonic choreography of the attraction here & here (begins, 2:38)

Temple Institute (Jerusalem, Israel):
Located in the Old City's Jewish quarter, the Institute is more pre-creation than re-creation. "The major focus of the Institute is its efforts towards the beginning of the actual rebuilding of the Holy Temple. Towards this end, the Institute has begun to restore and construct the sacred vessels for the service of the Holy Temple... They are made according to the exact specifications of the Bible, and have been constructed from the original source materials, such as gold, copper, silver and wood. These are authentic, accurate vessels, not merely replicas or models."
Founded: 1987

Holy Land Sailing (Tiberias, Israel):
At this attraction, visitors sail around the Sea of Galilee in a wooden boat, "an exact replica of the famous boats that played a key role in Jesus' life." The boats are modeled after a 1986 archaeological discovery of a "2000 year old" wooden boat in the Sea.
Founded: c.1990

The Holy Land (Castrocaro, Italy):
A replica on 200 square meters of land, built at the home of outsider artist Roberto Albertelli. Claims to include stones "taken secretly from the Golgotha."
Founded: c. 1980

Shrine of the Sacred Heart of Jesus (Nairobi, Kenya):
Features Ark of the Covenant replica and a Garden of Gesthemene statue series.
Founded: 2015

Museumpark Orientalis (Landstichting, Netherlands):
This Dutch attraction features various replicas of Jewish, Christian, and Muslim sites. The "museum" is both indoor and outdoor and is "as if walking through a different world."
Founded: 1911

Baguio Eco Park (Baguio, Philippines):
Located a four hour drive north of Manila, this Holy Land replica is one of three attractions in the Eco Park, alongside a science museum and "dinosaur island." Scenes include the Garden of Eden, Moses' exodus, Egyptian pyramids, and Jesus' "way of the cross."
Founded: 2014