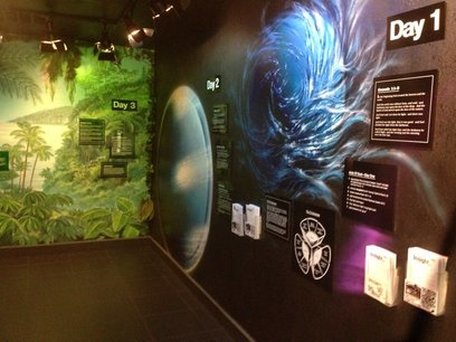 Creation and Earth History Museum (Santee, CA).
The attractions collected here perform young-earth creationist narratives through historical and scientific registers. Some attractions emphasize converting non-creationist visitors, while others provide a space for creationists to experience exhibits that align with their ideologies. Many do both.

Creation and Earth History Museum (Santee, CA):
This attraction offers "interactive museum experiences and activities" such as a tabernacle display and exhibits on human anatomy and the age of the earth, all in service of its mission to "provide scriptural and scientific evidence that reinforces the biblical account of creation."
Founded: 1977

World's Biggest Dinosaurs (Cabazon, CA):
Attraction boasts giant dinosaurs and an "educational adventure," seeking to "help the young and old explore what is known and not known about dinosaurs, man and the creation of the world in a practical, factual and fun way."
Founded: 1980

Adventure Safaris Dinosaur Warehouse and Exploratorium (Santa Maria, CA):
Run by a private collector, this attraction showcases a wide variety of artifacts from dinosaur bones and fossils to historical displays and military memorials to "help students learn about God's handiwork" as they complete a scavenger hunt throughout the displays.
Founded: 2010

Creation Adventures Museum (Arcadia, FL):
This attraction offers many "adventures," including guided museum tours, fossil digs, canoe trips, and field trips to see "spectacular evidences contradicting evolution," all of which activities vary based upon time of year and allow guests to "explore God's world in light of God's Word."
Founded: 2000

Creation Discovery Museum (Fort Lauderdale, FL):
A part of the Creation Studies Institute, this attraction offers exhibits including dinosaur fossils, mammoth remains, and a butterfly display, as well as hands-on education activities for children, so visitors can "learn about the true account of the origins of the universe, life, and man's early history."
Founded: 1987

Heart of America Science Resource Center (Haviland, KS):
"Hands-on science at its best!" This attraction provides museum exhibits as well as laboratory activities, field trips, seminars and other opportunities to "take scientific truth to this generation" through a young-earth creationist and biblical perspective.
Founded: 2013

Creation Museum (Petersburg, KY):
Founded: 2007
"Prepare to Believe" at this attraction that features exhibits portraying Bible stories from Adam and Eve to Noah's Ark, scientific evidence from a "biblical" standpoint, and biblical transmission history, as well as a planetarium, petting zoo, and zip lines.

The Dinosaur Encounter (Bridgton, ME):
This attraction features primarily dinosaur and other fossil remains to "disclose the truth about our existence based on the study of our past." The attraction is overseen by a founding pastor, who runs evangelistic outreaches through the museum.
Founded: 2007

Creation Experience Museum (Strafford, MO):
Attraction is part of Creation Ministries of the Ozarks, which seeks "to equip believers with answers [to evolutionary philosophy] based on the absolute truths of the Bible and true empirical science." It features biological, archaeological, and geological exhibits.
Founded: 2008

Glendive Dinosaur and Fossil Museum (Glendive, MT):
"The largest dinosaur and fossil museum in the United States to present its fossils in the context of biblical creation," this attraction is part of the Foundation Advancing Creation Truth and offers several exhibits of dinosaur bones and fossils to challenge evolutionary natural history museums.
Founded: 2009

Boneyard Creation Museum (Broken Bow, NE):
This attraction contains displays of artifacts "highlighting the many problems that evolution has." Its purpose is "displaying scientific evidence for creation and showing the difference between evolution and creation."
Founded: 2013

North Carolina Museum of Creation (Southern Pines, NC):
Housed in the basement of a Christian bookstore, this museum is also home to an antique tool museum and expansive taxidermy displays. The displays proclaim the Genesis account of creation, including a case with all the world's evidence for evolution, which is empty.
Founded: c.2002

Akron Fossil and Science Discovery Center (Akron, OH):
This attraction features museum exhibits with fossils and artifacts, as well as an outdoor adventure experience, providing visitors with tours and hands-on activities to "connect people to the truth of creation" and "answer questions of origins."
Founded: 2005

Wyatt Archaeological Museum (Cornersville, TN):
This small, two room museum is a one hour drive south of Nashville. Comprised mostly of replicas, the exhibits claim to offer material proof for the discovery of Noah's ark, the lost cities of Sodom and Gomorrah, Mt. Sinai, the Ark of the Covenant, and Moses' Red Sea Crossing.
Founded: 1994

Museum of Earth History (Dallas, TX):
Located on the campus of Christ for the Nations, this attraction offers "a place where science and the teachings of the Bible can be examined side-by-side" through geological and archaeological exhibits of fossils and artifacts, and is a ministry of the Creation Truth Foundation.
Founded: 2006

Discovery Center (Abilene, TX):
This attraction offers tours, seminars, and other events and activities, including live animals, a scale model of Noah's Ark, and life-size hi-tech robots, all in service of the museum's mission to "provide scientific and historic evidence for the truthfulness of God’s word."
Founded: 1980

Creation Evidence Museum of Texas (Glen Rose, TX):
This attraction displays fossils and artifacts and a detailed Noah's Ark replica, which highlights the "gopher technique" and technology that was used "in Bible times."
Founded: 1984

Mt. Blanco Fossil Museum (Crosbytown, TX):
This attraction is one of three Mt. Blanco companies, along with Mt. Blanco Casting Company, which sells molds and fossil casts, and Mt. Blanco Publishing Company. The museum "is a scientific and educational institution dedicated to a correct interpretation of Earth history and fossil remains," teaching an Earth history that is thousands of years old, instead of billions.
Founded: 1998

Creation Hall Museum (Lynchburg, VA):
Located on the campus of Liberty University, this attraction is primarily a resource for students as they "learn how to defend their belief system." Visitors can view fossils and artifacts up close to help classroom material come alive, in exhibits that highlight Liberty's belief in "the truth accounted in Genesis."
Founded: 2010

Mount St. Helens Creation Center (Silverlake, WA):
"Teaching the truth of scripture, from the foot of the mountain," this attraction and its exhibits focus on arguing for the scientific plausibility of a global flood based on "seven wonders" related to Mount St. Helens, "which show how the earth's landscape could be changed very rapidly."
Founded: 1998

Living Waters Bible Camp (Westby, WI):
One of the first museums in the nation to provide a six-day creation layout, the creation museum at Living Waters Bible camp features hands-on activities, expansive animal and insect displays, and more, in service of its mission "to draw people closer to Jesus Christ." The attraction also features a Tabernacle replica [cf. Re-Creations].
Founded: 1970

Big Valley Creation Science Museum (Big Valley, Canada):
Built to "display the evidence of [the Creator's] handiwork and refute the lie of evolution," this attraction features exhibits including Evidence from Geology, Terrible Lizards, Fossils and the Flood, and Dinosaurs and Humans, for visitors to browse and learn about Creation Science.
Founded: 2007

Creation Discovery Center (Bow Island, Canada):
This attraction aims to "point to the evidence of the Creator revealed in scripture," and features exhibits such as an Ocean Floor Adventure, Astronomy Gantry, Genesis Space Room, as well as special events and seminars.

The Secrets of Creation Traveling Museum (Red Deer, Canada):
This attraction from Creation Truth Ministries features Canada's largest traveling creation museum, including exhibits of fossils, casts, and others that "connect the Bible to the real world."

Museum of Creation (Winnipeg, Canada):
Located in the lower level of New Life Sanctuary church, this attraction is a family-curated collection of artifacts to teach biblical creation. The museum features biblical artifacts, as well as redefinitions of displays commonly used to teach evolution.
Founded: 2002

Creation Research Museum of Ontario (Goodwood, Canada):
Located in Goodwood Baptist Church, this attraction focuses on proving a young earth to be consistent with the Bible through its displays, the newest of which portrays both living fossils and an extinction exhibit. Opportunities to take part in quarry digs with the museum are also available.
Founded: 2004

Creation Science Centre (Cornwall, Canada):
Open since 2012, this attraction offers activities and exhibits for visitors of all ages to learn about Intelligent Design.

Noah's Ark (Florenceville, Canada):
Small-sized replica, the inside serves as a dormitory for a Bible College started by the attraction's founder.
Founded: 1993

Genesis Expo (Portsmouth, England):
The largest creation museum in the United Kingdom, Genesis Expo presents information as evidence of creation from the fields of biology, geology, and genetics. Visitors will also find Boris, the 20-foot dinosaur model in the entrance hall.
Founded: 2010

German Creation Museum (Schobrunn, Germany):
Visitors at this attraction will be observe a 75-minute multimedia presentation, "God, a fascinating Designer," showing the wonders of creation as well as Earth's history from a biblical perspective.

Bibelmuseum (Wuppertal, Germany):
Located in western Germany, this museum focuses on Bible printings from early scribes to the medieval period and the post-Reformation printing press era.

Parque Discovery (Mafra, Portugal):
This attraction is "a small theme park where visitors get a hands on tour through our Bible exhibition, creation museum and planetarium."