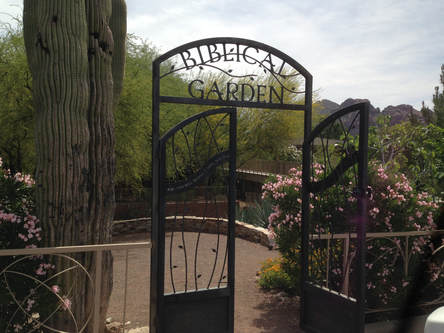 St. Francis of Assisi Episcopal Church Biblical Garden (Simi Valley, CA):
Created as as Girl Scout eagle project, this winding garden is intermixed with a Stations of the Cross walk and ends with a rock labyrinth.
Founded: 2011

The Cathedral Church of St. John the Divine (New York, NY):
Founded: 1973
This garden is enclosed toward the back part of the property.

St. Paul's United Methodist Church (Manteca, CA):
This garden is situated in the church's interior courtyard and is accompanied by a St. Francis statute and walking labyrinth.
Founded: 1995

Lake Junaluska Biblical Garden (Junaluska, NC):
Located at Methodist retreat in the mountains. While you are there, check out the World Methodist Museum on site, which has historical artifacts of American Methodism such as one of John Wesley's traveling pulpits.
Founded: 2010

Ojai Presbyterian Church (Ojai, CA):
PC-USA; it is situated along the outside border between the church and the public street.
Founded: 1995

Trinity Lutheran Church (Simi Valley, CA):
This garden is organized according to biblical themes. A nice series of photos are on the congregation's website.
Founded: 1978

Redeemer Biblical Garden (Jackson, MI):
Founded: 2014
Small garden in back of church property. Adjacent to the garden is a walking prayer trail.

Ecumenical or Other Protestant:

Israel Prayer Garden (Corinth, TX):
Founded: 2011
This garden is based at the charismatic Glory of Zion international congregation. This one acre garden features numerous biblical varieties and is "modeled after ancient maps of Israel's Twelve Tribes."