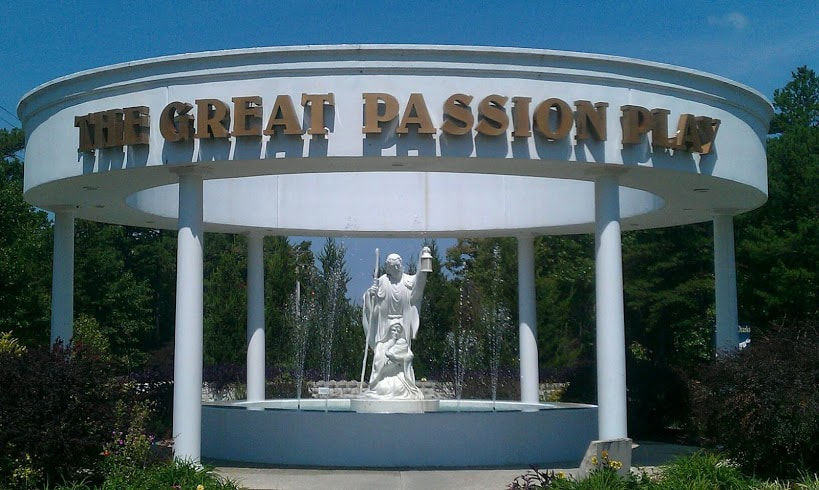 ​Nestled in the beautiful landscape of the Ozark Mountains, on the outskirts of the Victorian-style historic district of Eureka Springs, Arkansas, sits a sprawling Christian tourist destination called The Great Passion Play. This 167-acre campus features an amalgamation of attractions: the titular outdoor theatrical production The Great Passion Play, the iconic Christ of the Ozarks statue, a tour through a collection of Holy Land replicas, and several homespun museums displaying the private collections of the organization’s founders. The Great Passion Play, formerly known as the “Sacred Projects,” promises guests the opportunity to “relive the greatest story ever told” and to be inspired by God’s providence in a family-friendly environment. 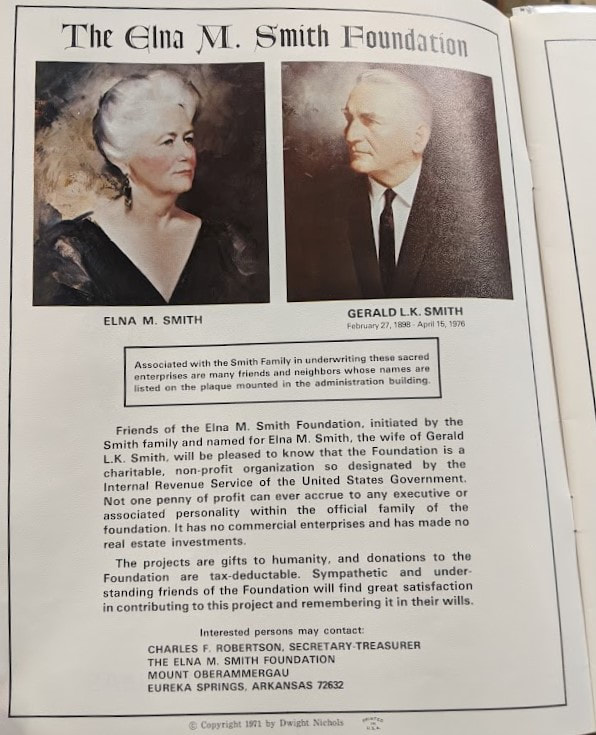 ​The five original attraction that made up the “Sacred Projects” were the brainchildren of Gerald L.K. Smith. In 1964, Smith moved to Arkansas after a 30-year career in politics. He launched three failed campaigns for the presidency of the United States under his own political party called the America First Party (later renamed the Christian Nationalist Party) and was known as a fervent and controversial orator who peddled white supremacy, anti-Semitic rhetoric, and conspiracy theories. When he retired in Eureka Springs, Smith wanted to distance himself and his legacy from his political persona by launching a religious organization named after his wife, the Elna M. Smith Foundation. To gain support from the surrounding community, Smith promised local officials that the foundation’s Sacred Projects were solely intended to be religious shrines and were not inherently political or commercial. However, remnants of his political ideology—most notably, his intense white nationalism—can still be seen throughout the campus today. 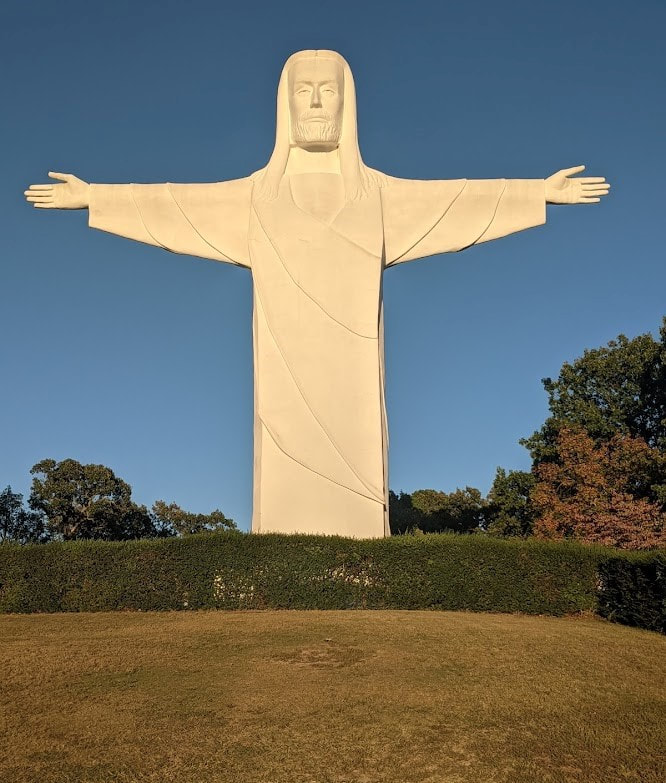 ​The first sacred project, the Christ of the Ozarks statue, is still a major landmark in Arkansas today. Commissioned in 1965 by Smith, the statue took sculptor Emmet Sullivan almost a year to complete and soon helped revive the tourism industry in Eureka Springs. Made from mortar and steel-reinforced concrete, the seven-story-tall Christ figure with outstretched arms dominates the local landscape and is even visible from neighboring states. The statue continues to circulate in popular culture as an icon of the Ozarks, appearing in films like Pass the Ammo (1988) and Elizabethtown (2005) as well as season three of HBO’s television crime drama True Detective (2019). 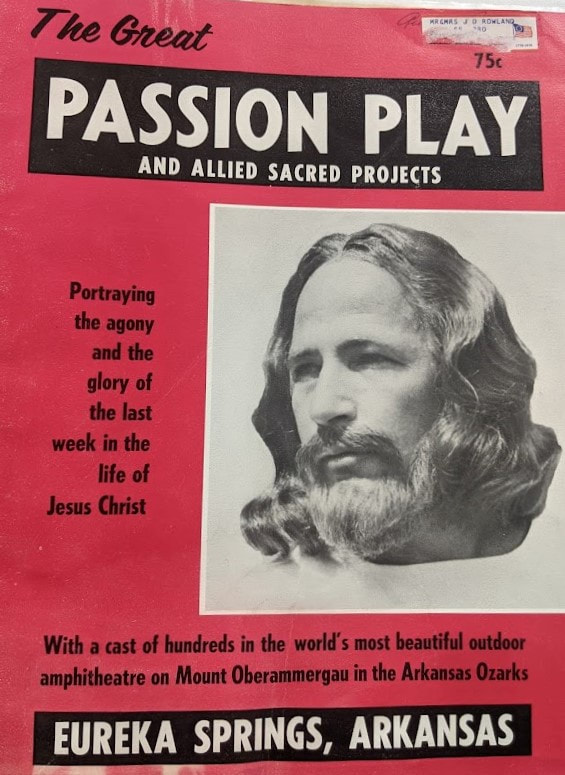 ​The idea for a Passion play came to Smith during the construction of the statue in 1965. While admiring Sullivan’s partially completed work, Smith recalled being struck with divine inspiration and started planning some sort of “Easter tableau” based on the longest running, and arguably most famous Passion play, that of Oberammergau, Germany. The inhabitants of this small Bavarian village have performed their Passion play every ten years since 1634. Gerald L.K. Smith admired the Passion play at Oberammergau so much he originally announced The Great Passion Play simply as a “presentation of Oberammergau Passion Play” and renamed the amphitheater’s construction site “Mount Oberammergau.”
​Smith hired Robert Hyde, a theatre producer, director, and actor, to steer the artistic vision of The Great Passion Play, giving him control over everything from writing the script to overseeing the design and construction of the set, costumes, and props. Furthermore, Hyde directed the show and played the role of Christ from its opening in 1968 to 1979. By August 21, 1976, less than a decade after its opening, The Great Passion Play became the largest outdoor pageant performed in the United States. Throughout the more than fifty-year history of this Passion play, just shy of 8 million people have seen the show.
​The Great Passion Play is still performed up to four times a week between the months of May and October in its outdoor amphitheater that can seat more than 4,000 spectators each night. The 550-foot set, built into a forested hillside, consists of fourteen permanent structures, some up to three-stories in height, that represent first-century C.E. Jerusalem and its surrounding areas.  The 170- person cast made up of local volunteers along with dozens of trained animal performers use the space to retell “The Greatest Story Ever Told,” over the course of two hours. 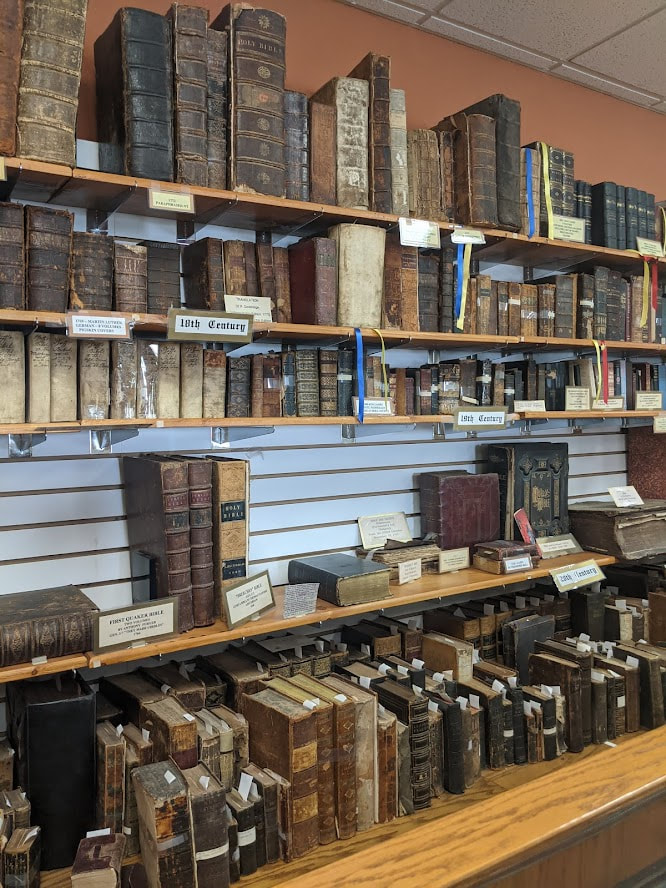 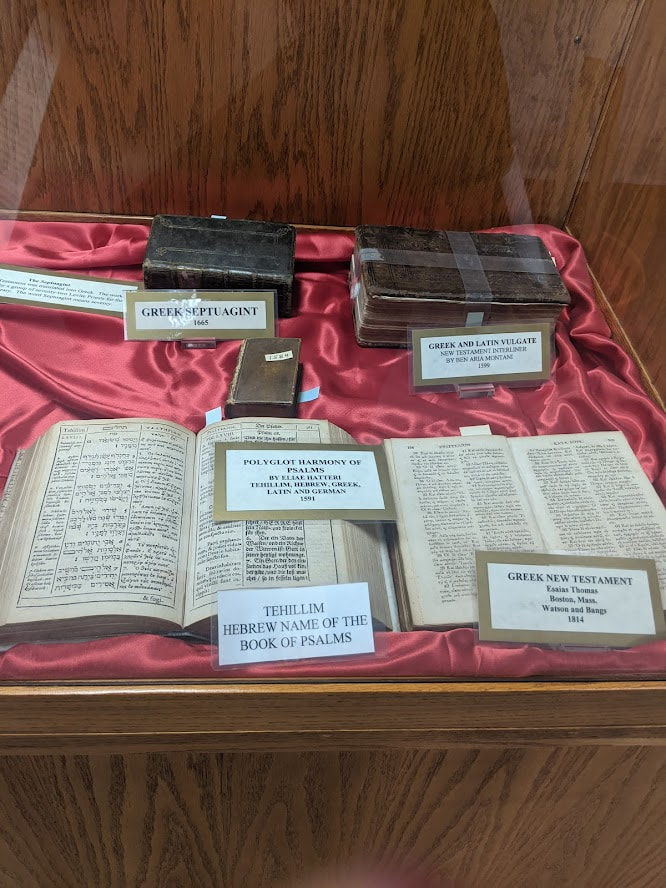 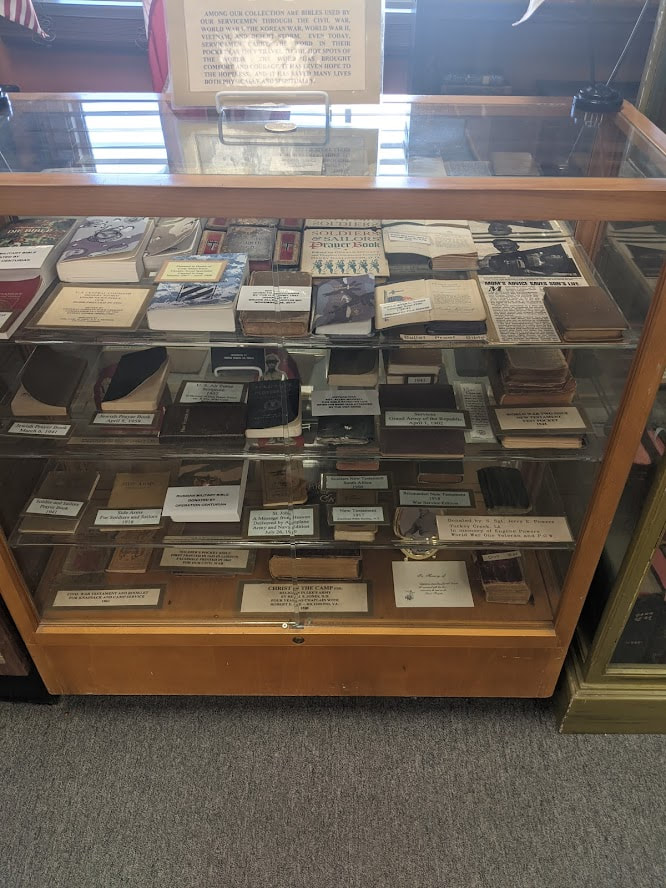 As The Great Passion Play gained in popularity in its early years, the Elna M. Smith Foundation found new opportunities to expand. Elna Smith donated her collection of rare Bibles to form the foundation’s third sacred project, a Bible Museum. At first glance, the Bible Museum appears to be a simple, one-room store filled with a variety of books. After closer inspection, visitors can find several hidden gems—such as a page from an original Gutenberg Bible, a first edition 1611 King James Version of the Bible, and a Bible signed by all the founding Gideons in 1898—among the more than 6,000 Bibles representing 625 languages and dialects.
​Elna Smith also donated her extensive art collection to her foundation, creating the Christ Only Art Gallery (now known as the Sacred Arts Museum) as the fourth sacred project. The Sacred Arts Museum houses a diverse assortment of Christian artworks featuring over 1,000 pieces and representing 64 different forms, including paintings, drawings, sculptures, ceramics, mosaics, jewelry, altarpieces, and wood carvings. Precious relics of art history—like a ninth century Roman marble cameo or a rendition of the Last Supper depicted on Dresden royal china commissioned by Kaiser Wilhelm I—are displayed unceremoniously next to portraits of Christ painted by contemporary amateur artists or small treasure troves of cross-shaped jewelry. The museum also functions as a partial commercial gallery, selling dozens of original pieces and prints by American Christian artist Jack E. Dawson. 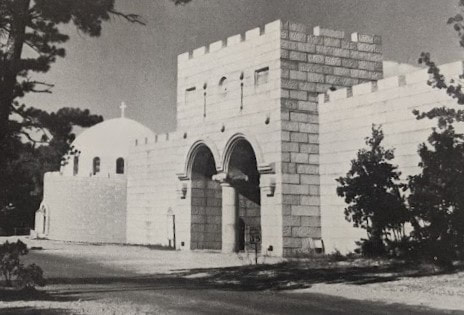 The fifth and final official sacred project was the foundation’s most ambitious undertaking: the New Holy Land.  Originally meant to be a Christian amusement park constructed over a twenty-year period with a budget of more than ten million dollars, the New Holy Land’s vision aimed not only to recreate sites such as the Sea of Galilee and Golgotha, but also to replicate biblical life across the centuries with a full-scale wilderness tabernacle and an ancient Jerusalem marketplace. Only the Great Wall of Jerusalem replica, a five-story-high structure wide enough to allow two buses to pass through simultaneously, was completed by the time of Smith’s death in 1976, and the foundation failed to meet fundraising goals to build other such elaborate structures.  Instead, smaller buildings were constructed, and what was originally intended as an amusement park became a guided tour. 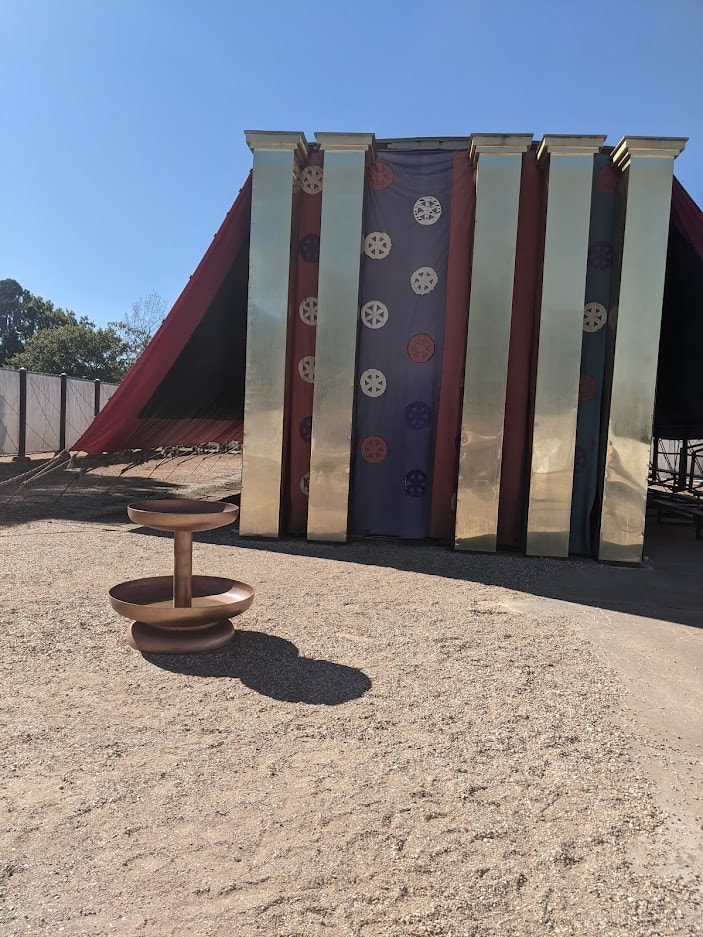 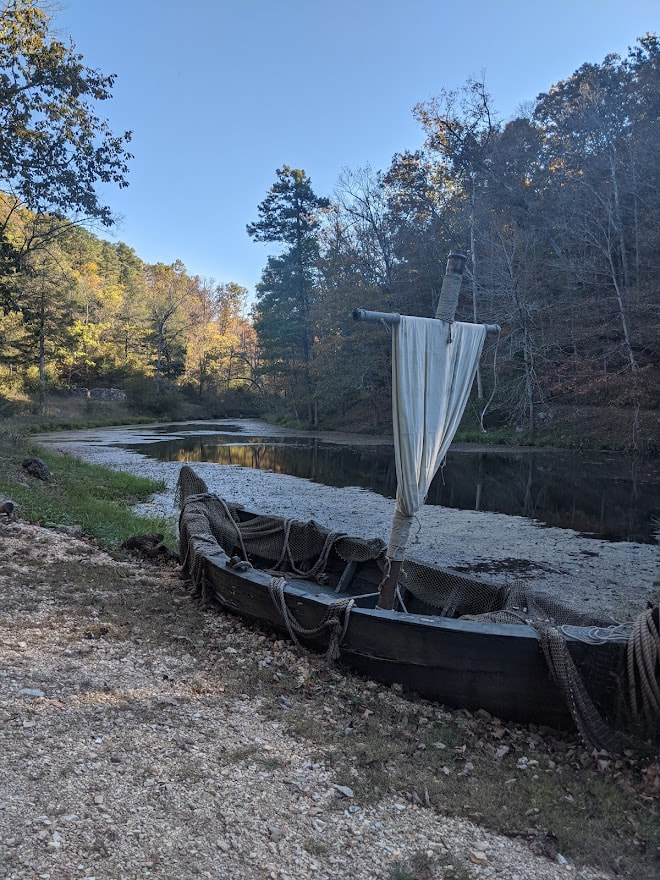 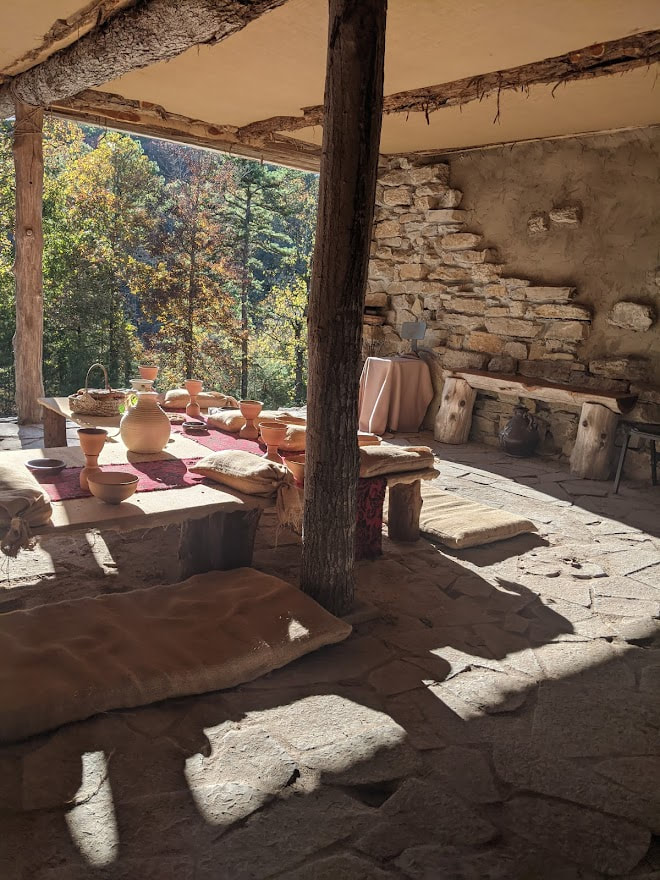 ​Stops on the tour include: a full-scale replica of the Tabernacle of Moses; a first century stable representing the birth site of Jesus; a small pond representing the Sea of Galilee and a model of the “Jesus boat”; the upper room where the Last Supper took place; and Jesus’s tomb with the door stone rolled away. Sites from the New Holy Land Tour are often used for didactic performances and lectures before showing of The Great Passion Play. These performances, such as Parables of the Potter or David the Shepherd, are similar to living history museums in that they aim to provide visitors an interactive experience of what daily life may have been like in first century Jerusalem.
​In addition to the five official sacred projects, the Elna M. Smith Foundation incorporated an eclectic array of side attractions on its campus, including a single-room creationist museum called the “History Museum,” a memorial chapel dedicated to the Smith family, a restored late-nineteenth century church, a section of the Berlin wall with graffiti citing Psalm 23, an Israeli bomb shelter with signage detailing political support for Israel in the ongoing conflict with Palestine, a prayer garden, a petting zoo, 18-miles of hiking and biking trails, and two gift shops. 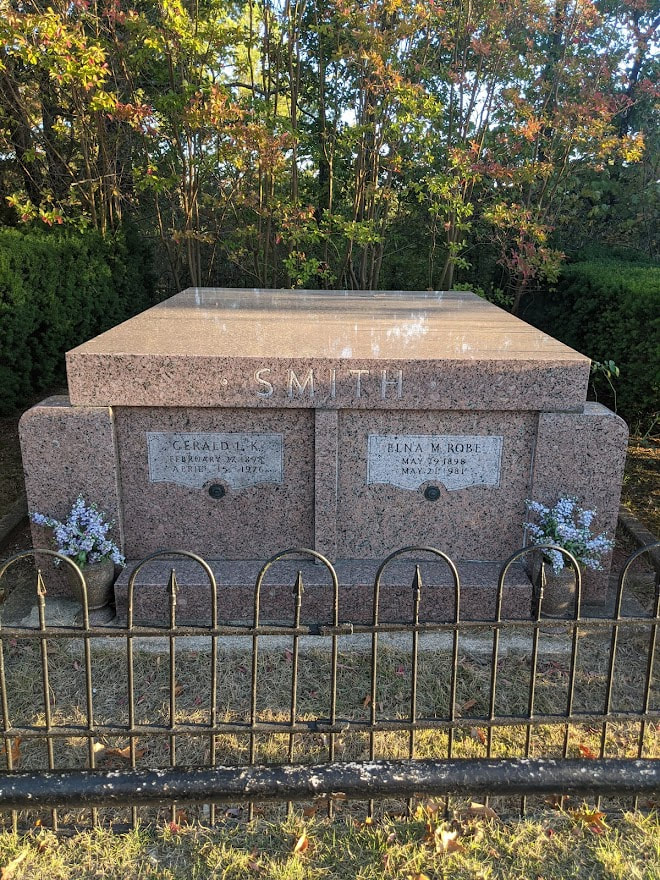 Both Gerald L.K. and Elna M. Smith were actively involved in the leadership of Elna M. Smith Foundation and operation of the “Sacred Projects” until their deaths in 1976 and 1981, respectively, and both are buried at the foot of the Christ of the Ozarks statue. The Elna M. Smith Foundation continued to own and produce The Great Passion Play and its sister attractions until the organization faced foreclosure and financial crisis in 2012. Randall Christy, founder and president of the Gospel Station Network in Ada, Oklahoma, took over as the organization’s CEO and Executive Director for the 2013 season after successfully launching a 10-day fundraising campaign to save The Great Passion Play. Under this new leadership, The Great Passion Play still operates on its original campus today. Beginning on Easter weekend this year (April 15 &16, 2022), The Great Passion Play will launch its fifty-fifth season. Additionally, the organization is introducing a new virtual reality experience to augment their New Holy Land Tour this year. This virtual pilgrimage, presented by oculus, promises to immerse guests in story of Jesus Christ’s life, from his birth in Bethlehem to his ascension into heaven, by touring key locations from the Gospels. 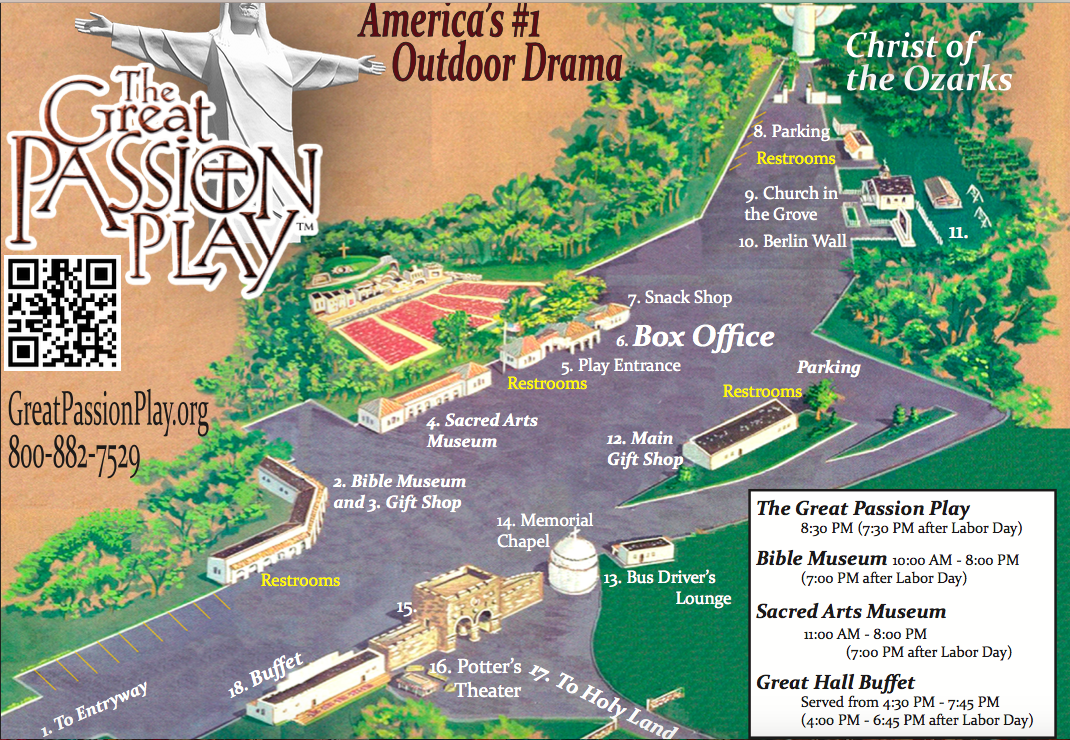 Throughout its tumultuous history, The Great Passion Play has seen many changes in both artistic and administrative leadership. Yet, the organization remains inextricably tied to the Christian Nationalist roots of its founders. This growing political association serves as a microcosm of the broader relationship between evangelical ministries and the long, crowded history of the rise of Christian Right in US politics. While it is inaccurate to conflate evangelicals with the Christian Right (considering evangelicals represent an incredibly diverse and hard to define population that run the political gamut from right to left and the Christian Right includes members from a wide range of Christian traditions including Catholicism and Mormonism), it is important to recognize how effective evangelical ministries can be when organizing grassroots political campaigns and movements that draw attention to conservative issues and mobilize voters. The Great Passion Play displays a myriad of material objects evidencing and forwarding the political positions of the Christian Right. For example, signage surrounding the Israeli bomb shelter and the presence of the shelter itself advocate for a Zionistic approach to U.S. foreign policy regarding the Israeli-Palestine conflict, while gift shop t-shirts provide commentary on the recent National Anthem protests: “I stand for the flag and kneel for the cross.” While The Great Passion Play may indeed consist of many religious shrines, just as Gerald L. K. Smith promised local officials in the 1960s, it is dangerous not to recognize them as both political and commercial as well.